Asking your pitcher to throw 14 innings? Not so good. Have to agree with this criticism (but I’m glad he did). 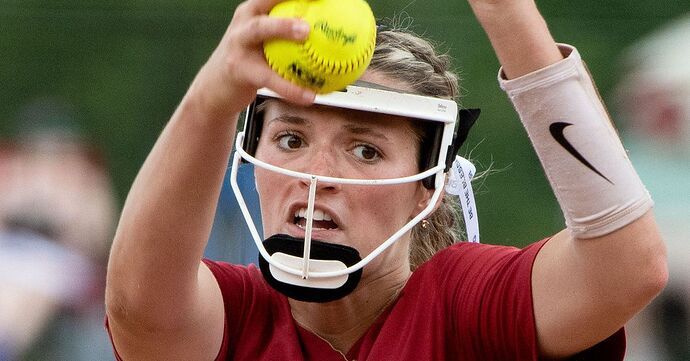 The Bama coach tried to kill poor Montana Fouts as Alabama was eliminated from the NCAA Tournament.

That is just crazy. You have to admire her, but question the coach. That is very poor. Hope Montana recovers ok. Anybody that gives that sort of effort has to be special.

An our baseball pitchers cannot get through 2 innings and think they have done some with 5. Mr. Gibson would love this young lady. He said that the game is 9 innings so I go out and pitch 9 innings.

Our pitchers are not asking to come out after 5. DVH and Hobbs are making those decisions.

Meanwhile, Washington is starting the same pitcher who just got the win over Texas 30 minutes ago. We’ll see how long they let her go.

Texas is coming back with the same pitcher as well.

Comparing the amount of pitches thrown between softball and baseball is completely different! Mary Haff threw 111 today and I saw her throw 123 against Florida! No way would you that in baseball! In SEC tournament a girl from TN threw 161 against MSST in a 1-0 win. It does take some getting used to!

Montana Fouts of Bama threw 135 pitches in the first game and 110 in the second. Your average 245-pitch afternoon.

I’ll be very shocked if they take plaine out

Both starters are still in, but the U-Dub girl gave up a two-run double in the top of the fifth. 2-0 EOE.

UW’s Plain was pulled in the top of the 7th with EOE up 3-0 and the bases loaded. She just ran out of gas. Can’t imagine why; she only threw 215 pitches in 13.2 innings today.

The Texass pitcher has thrown “only” 172 pitches going into the bottom of the 7th.

I think that was just Coach way of letting fans show their Appreciation for her,she has been unbelievable.

And U-Dub has now scored two in the 7th off Dolcini, who is now at 193 pitches for the day. Tying run at first with two outs.

I have come to the conclusion that both these coaches are IDIOTS.