My wife has some autoimmune issues, and so she passed on taking it. Even with her issues, I disagreed with her. I thought/think she should have taken it. But, she is an adult and gets to make her own decisions! I will be taking it as soon as I can. 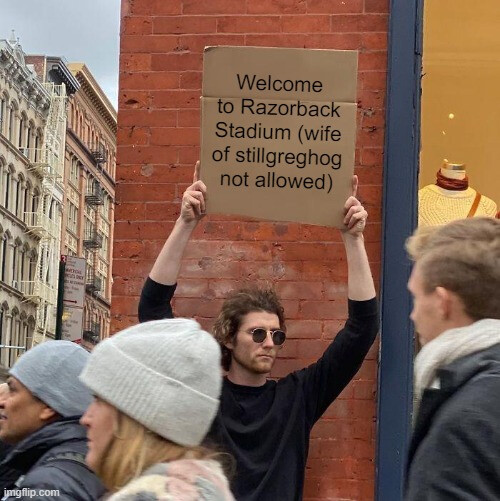 If it’s true that anyone wanting a vaccine can get one by the end of May, I see no reason why you can’t have full stadiums. If people who refuse the vaccine attend they’re doing it at their own risk.

Yep, and push it to July, which will more than likely happen in this “over promise, under deliver” world we live in. It’s up to the individuals to make their choice, but don’t penalize those who do.

What we don’t know are the long-term effects of the vaccine. I developed a rash on the back of my arm and shoulder a week after getting the 2nd Pfizer shot in January. Hydrocortisone cream helps, but it still hasn’t completely cleared up.

I’m aware of that, but it’s all a risk-benefit analysis. The overwhelming scientific evidence weighs on the side of taking the vaccine for all but a few adults.

When ALABAMA won this year and had it’s parade on the streets of Tuscaloosa anyone that has a t v could witness (even the announcers confirmed it) that hardly anyone were wearing masks. Well, that was several hundred thousand people at that parade about two months ago. I haven’t heard about any mass deaths or covid-19 infections since that time.

I’m NOT not encouraging people to continue using safeguards masks safe distancing etc, especially if you feel the need to per each persons health. Keep washing those hands and be wise and try to enjoy what piece of life that we’ve been given.

I got my first dose of Modena today. Guy behind me said he refused it until daughter said no visitation to her or his grand son. He got it scheduled 10 minutes later.

He was kinda funny. He said he was against anything to do with Bill Gates. I told him Bill Gates was a friend. He got a bit mad at me. The pharmacist popped out in the middle of that conversation and said, “You should not pay attention to Clay. I don’t think he knows Bill Gates. Clay is a hermit on the Norfork River.”

At that we both got vaccinated and sat together for 15 minutes talking about our family. His daughter is an ER nurse at Washington Regional.

The guy admitted he’s glad to get it and plans on some travel after next dose.

Got a sore shoulder one day later. Probably what was to be expected.

Good for everyone getting it. As I said before and stand with countless millions, it’s a personal individual decision.

DCH went from about 130 covid beds to nearly 200 shortly after the celebration event in the streets of Tuscalooser. The mayor was frantic, as was the hospital. Things have calmed down.

Talked to a gal at the gym who considers covid nothing more than a bad cold; her family all had it but had mild cases–all relatively young (40s and below).

My folks just got past the waiting period after their second shot last week. We took them out to dinner Friday night, the first time they had been out to eat since February of last year. It was a great evening, and they are also planning on doing some car travel now.

My second Pfizer dose was scheduled for Feb 19, but was postponed due to the snow. I’m now supposed to get it tomorrow. That’s 5 weeks past my first dose. Really ready to get it.