Bama and Auburn not playing well

They cannot let the big ten sweep them today. SEC not playing with dominant defenses so far today. That has always been the SEC calling card especially for these two teams.

I’m not surprised Bama is laying an egg. They expect to be in the playoffs and anything less is a letdown. Plus a couple of defensive starters sat this one out. But as I’ve noted, a bowl game is a psychology exercise as much as a football game. PJ Fleck probably has the Gophers geeked to be there, and Auburn is meh about it.

Read this and another example of how Saban preps his team and staff for games. He does not leave much to chance. 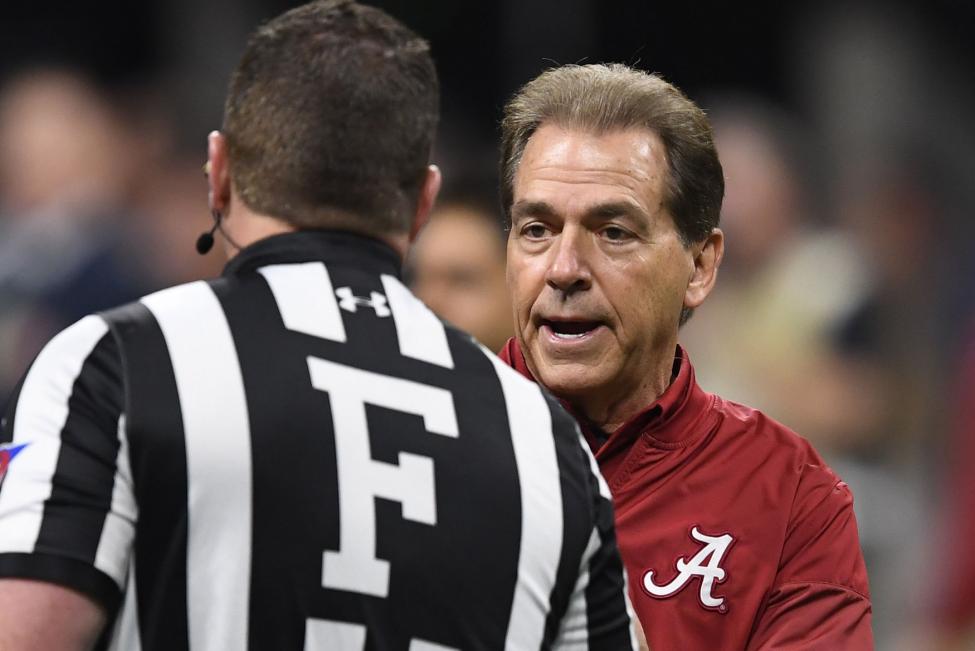 Nick Saban and his staff have a scouting report for officiating crews. Here's...

A New York Times best selling book could be put together on the all the things that makes Nick Saban and The Process that has made Alabama one of the elite programs of college football. From recruiting, to developing coaches and a winning game plan,...

I read the same thing, but there have been at least two cases where Bama sleepwalked through a bowl: 2009 Sugar (lost to Utah), 2014 Sugar (lost to OU). So the Process has not been perfect at bowl time. Sure wasn’t perfect when Clemson steamrolled them last year either.

Well…Auburn fans will be very unhappy.

Bama’s outscored Michigan 14-0 in the second half and seems to have things in hand. But the Fighting Guses got Gophered.

Alabama always has an excuse when they lose. When they win they played like Alabama when they lose, they were not into it, lost their qb, got tricked, or some other alibi. They have the best coach and the best players, when they lose, it because they got beat, I do t care to hear their excuses. And it looks like chad Morris and auburn just belly flopped into the off season.

Alabama always has an excuse when they lose.

That’s not their excuse, that’s my assessment after watching both those games. It was also my assessment of our performance in the 2008 Cotton Bowl against Missouri. We were going through the motions.

Poor Gus. Those AU fans will forget about that Bama win quickly with a poor start next year.

While I believe the bowl season is not always a reflection of the teams that won the bid, due to coaching changes, players not participating, let downs, not to mention a month long layoff, A team like Alabama should always be ready to play, they are loaded with blue chippers, if the 1 ain’t feeling it, play the 2. I just don’t buy their excuses, they should play like joe DiMaggio play hard because someone might not hve seem them play before.

they should play like joe DiMaggio play hard because someone might not hve seem them play before.

Five-stars or one star, they’re still 19 and 20 year old kids and sometimes their hearts and minds aren’t fully engaged. Especially in a bowl game when you’re out of the normal routine. You tend to blame the coach when that happens, and he gets his share of the blame, but it’s happened twice to Saban who is as good as there’s ever been in this game.

I always find myself cheering for SEC teams in bowl games, but I can’t say I’m bothered that Auburn lost. In fact, the more I think about it, the more I like it.

I always find myself cheering for SEC teams in bowl games, but I can’t say I’m bothered that Auburn lost. In fact, the more I think about it, the more I like it.

That’s pretty much the way that I looked at it. I started out being lukewarm about the tigger/plainsmen. The longer the game went on, the more I liked it.

I was glad to see Bama beat Harbaugh.

Minnesota didn’t have 12 people left in the state yesterday… they were all at the game. Glad to see Gus and Chad have a beat down.