Bad News on my Buddy

Harry King fell in the street while walking his dog last night. Broke his hip. He’s at St. Vincent’s Infirmary.

He will not need surgery at this point. I’ll know more this morning.

Most of you know it, but Harry is like a brother to me. Love him dearly.

Some of my favorite times are hanging out with Harry or at bowl games with our families. Rich memories.

That’s tough…prayers for Harry. I had similar story yesterday when old couple called me trying to get the wife to Houston for MD Anderson appointment after her caregiver husband slipped on the ice and broke/dislocated ankle. What a mess this stuff outside has been. All our clinics shut down this week…that’s a lot of people missing their docs this week for care.

My column on Harry from last summer when he retired from writing for our magazine: 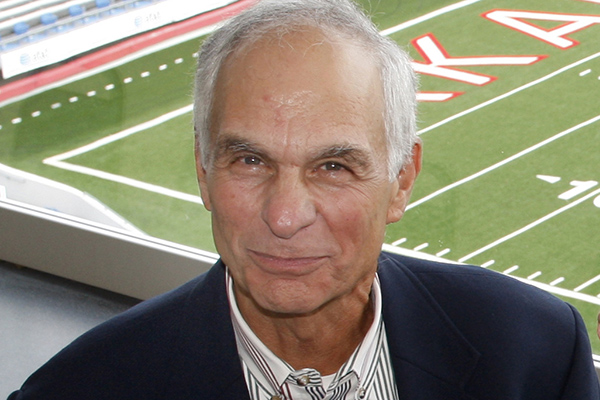 State of the Hogs: King a winner

Competitive fire shows up in different ways. I saw it first with Harry King while playing recreational sports, then later at the horse track.

After the sun came out a bit yesterday, conditions have become considerably worse on the side roads in Little Rock. Hope he recovers quickly!

I miss Harry’s articles on our Hogs. So sorry to hear about his fall. Prayers for Harry and his family. And prayers for you too Clay. It’s so tough.

Harry is one of a kind. Of course we were competitors for a while (he was at AP for so long, I was at UPI for parts of four years) but we’d talk in the press box and at the old Saturday morning media golf scrambles before Little Rock football games (since Fayetteville didn’t have lights then, there was no time for a scramble before an afternoon game at RRS). I don’t think I was ever in Harry’s scramble group though; they usually paired me with Paul Eells because he was a good enough player to carry my sorry butt, although we never won.

One of my scramble stories involves Harry though. I don’t remember which course we were playing (there were several in the scramble rotation, might have been Burns Park) but Paul hit a tee shot into a fairway bunker and none of us hackers did anything even as good, so we all played out of the bunker. Somehow I hit the shot of my life out of that bunker with an 8-iron and stopped it six inches from the flag. Harry’s group was just leaving the green in front of us. When I got up to the green, Harry pitched me my ball and said “It’s good. Helluva shot, Jeff.” I would have liked to make that birdie putt though.

Tough part is that his wife Ellen cannot visit Harry in the hospital. She has had her second Covid shot but needs another couple of weeks to know she is fully protected. Harry has had two Covid shots, too.

Harry is a state treasure. I put my dad, Jim Bailey and Harry in class by themselves as sportswriters. No one else is close.

I put my dad, Jim Bailey and Harry in class by themselves as sportswriters.

Talked to Harry’s son Petey. The hip is broken in two places. He’ll have to have surgery this morning. Whether or not they replace the hip isn’t clear just yet. He should be home in two or three days.

So sorry to hear about that! Praying for Harry and the family

Sad news. Hope all heal up for Spring.

My grandad broke his hip on Christmas Eve. He had to have surgery as well. He’s about the most independent 85 year old you will ever meet. It was very difficult for him at first. The first couple of weeks he was in a lot of pain and feeling down mentally, worried about losing his independence.

Fast forward to February and he’s already - against doctors’ wishes - doing some light chores in the yard. Yesterday my dad caught him walking through the snow to get a newspaper from a gas station about .2 miles from his house.

So let Harry know he’s very likely in the bleakest of times right now. He won’t be there too long.

Please relay that he has a LOT of folks here pulling for his quick recovery.

Harry had surgery this afternoon. He had two screws and a plate to fix the two breaks in his hip. A full replacement was not required. He was scheduled to be up and walking in his first phase of rehab late this afternoon. Plans are that he should go home Monday. His family is appreciative of the prayers.

Harry is a tough hombre. I’m glad he’s doing so well after such a terrible fall last night. It could have turned out much worse.

Prayers up for Harry and his family.
Praying for a swift and full recovery!

Hate to hear that about Harry. Dang it in his 1st year of retirement to.
Always looked forward to his Hog articles like I did Orvilles.
Hopefully he recovers quickly and completely. We are all pulling for him. He’s like family here as well.

Prayers indeed for a quick and speedy recovery!

Some good news when weighed against the possible outcomes.