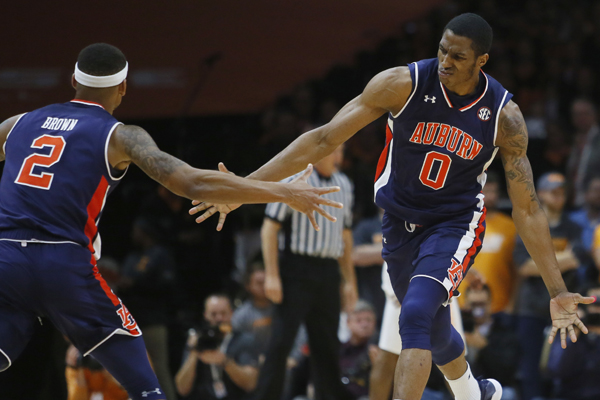 Auburn forward Horace Spencer (0) is congratulated by guard Bryce Brown (2) after dunking the ball against Tennessee in the first half of an NCAA college basketball game Tuesday, Jan. 2, 2018, in Knoxville, Tenn. (AP Photo/Crystal LoGiudice)

FAYETTEVILLE — Auburn Coach Bruce Pearl said the only “4-14” T-shirt he’s had printed up so far is the one he wore before the Tigers played at Tennessee on Tuesday night.

If the Tigers keep playing the way they did in beating No. 23 Tennessee 94-84 at Thompson-Boling Arena, “4-14” shirts soon might be flying off the shelves of stores in Auburn, Ala.

Pearl wore the shirt at Auburn’s shootaround at Tennessee in response to a prediction by CBS Sports’ Kyle Boone that the Tigers will finish 4-14 in SEC play.

There’s a long way to go in the conference race, but the Tigers (13-1, 1-0) are off to a nice start after breaking a 10-game losing streak to Tennessee. They’ll carry an 11-game winning streak into their game against the University 0f Arkansas, Fayetteville at 5 p.m. Saturday in Auburn Arena.

“At this point just the one that matters,” Pearl told reporters in Auburn on Thursday when was asked about how many “4-14” shirts have been printed. “We’ll see. It’s a nice reminder, but we’ve still got to defend, we have to train, we have to stay out of foul trouble, we’ve got to get back in transition against Arkansas (11-3, 1-1).

The Tigers were picked to finish ninth in the SEC in a preseason media poll, and that was before two returning sophomore starters — 6-7 Danjel Purifoy and 6-11 Austin Wiley — were suspended indefinitely by Auburn while their eligibility is reviewed by the school in the wake of an FBI investigation into college basketball bribery involving coaches, agents and shoe and clothing apparel companies to entice top recruits to sign with certain schools.

The FBI arrested Tigers assistant coach Chuck Person and charged him with bribery, fraud and conspiracy. After initially being suspended by Auburn, Person was fired.

Person’s firing and the suspensions of Purifoy and Wiley figured to derail Auburn’s season before it even got started, but instead the Tigers have their winning streak since a 14-gamer during the 1999-2000 season.

“Obviously, we’re the underdogs of our conference,” Auburn junior forward Horace Spencer told reporters Thursday when asked if Pearl’s “4-14” shirt motivates the team. “We wanted to show the conference that y’all are overlooking us and that we have more to show y’all.”

Spencer said the players will be getting “4-14” shirts, too.

“We’re going to wear that shirt during our warmups and let them know that we see what y’all rated us,” he said. “And we’re going to show y’all we’re better than that.”

“To be honest with you, we actually expected to do this,” Brown said after the game. “We knew we were going to have a lot of people doubt us, but this is what we expected.

“We wanted to open up people’s eyes. Hopefully, we did that.”

Spencer is averaging 4.8 points and 5.6 rebounds, but he had 10 points and 9 rebounds in 20 minutes off the bench at Tennessee.

“Horace Spencer is playing his best basketball since he’s gotten here,” Pearl said. “It’s been extremely impactful. He leads by example. He’s been a great teammate.”

Spencer has made six starts in 14 games.

“Whether he’s starting or coming off the bench, he wants to win more than anything,” Pearl said. “Horace is a physical player and a tough player. He’s using that physicality and that toughness in his rebounding and being an opportunistic scorer.

“I think a big factor for our success is that if Anfernee doesn’t have it in a particular night or a particular half, Horace will pick him up and vice versa. It’s been that way at every position.”

“I just think when you have adversity, that’s when guys kind of come together,” Razorbacks Coach Mike Anderson said of Auburn’s success. “I think they’re playing for each other. They’re playing with a chip on their shoulder, so to speak.”

Pearl said Thursday that Purifoy and Wiley are enrolled at Auburn for the spring semester and continue to practice with the team.

Pearl was asked if the Tigers were underrated going into the season. They finished 18-14 last season, including 7-9 in SEC play

“We finished 11th last year, and we were picked anywhere between nine and 11,” he said. “So that’s kind of what we earned.”

The Tigers are earning more respect with their impressive start.

“It’s a great feeling to be clicking the way we are,” Spencer said. “The chemistry is amazing, mainly on the defensive end, picking up for each other, recovering for each other and just playing hard for each other.”