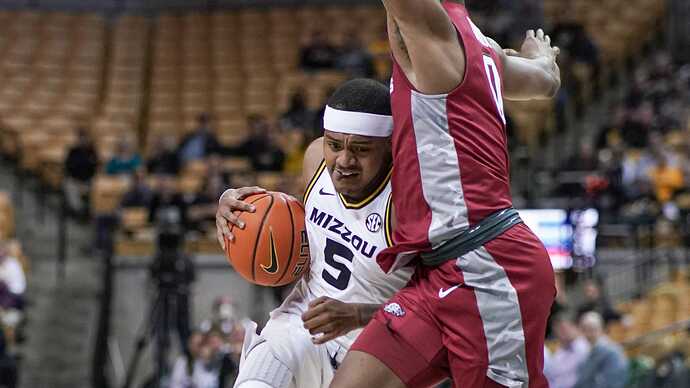 Arkansas Razorbacks basketball fans are used to Bud Walton Arena and the attendance at Mizzou Arena was... not the same.

I watched most of game last night but was switching to other tasks but I noticed very few folks in attendance which has happened several games there this year. I have not found the reported attendance, does any know that number? Thanks in advance, curious.

Poor choice of words in that headline. Crucify? That really wasn’t a newspaper story. I do not take joy in pointing out the problems with that outfit. It’s hardly a newspaper anymore. All newspapers are less than what they once were, but none has taken a big of a dive as the SW Times Record.

The announced attendance was 7,448.

When I was at the Times Record there were 3 people on staff to cover all sports in the River Valley and east Oklahoma. It was pretty tough.

I can only assume that was tickets sold. It didn’t look half full to me when the cameras panned the crowd.

I believe Arkansas has announced tickets sold this year for every game until the Auburn game, and then obviously we announced a record crowd. You would think they would do it one way or another (tickets sold or actual people in the building) rather than change for one game. Just seemed a bit strange to me, though I guess that announced record crowd makes us look better.

The only attendance numbers I trust anymore are the ones reported to the NCAA, which are for tickets sold.

From TV I would guess there were 2000 people there tops.

The Times Record is part the Gannett/USA Today group now. The linked article appears to be from someone who aggregates information for the network.

Christina Long recently began covering the Razorbacks for the Times Record. I think she does good work.

I agree. She’s been great to work with since she started.

I don’t blame them, I wouldn’t pay a dollar to watch that “show” unless I was a Hog fan.

not surprised at all,they have had a tough yr but Martin can coach and has upset a team that beat us and almost beat Auburn… just make’s me thankful for where our program is right now.

A coach will have a hard time recruiting and keeping a job with attendance numbers like that and the weather didn’t play into reasons for low turn out. WPS

I think the writing is on the wall for Cuonzo Martin. The attendance is a result of years of bad play. Even last year’s team that made the tournament underperformed, in my opinion.

I agree and living up north of Como the grumbling at the local restaurant this morning was frequent and prolonged. WPS

Conzo Martin can’t continue to have bad years! His time could run out pretty soon.

I’m unimpressed with most articles based on Twitter reactions.

Thank Matt, I knew it had to be low but couldn’t find it quickly this morning. $1 seats is telling to me.

Could have openings at Mizzou, UGA, S. Carolina and MS St.