The best way I know how to describe the atmosphere downtown today is that of a football bowl game. There are thousands of Arkansas and Ole Miss fans in town for this game — more Razorback fans, but a large number of Rebels, too.

It should be a great environment tonight.

I feel bad for those who have been across the street running up the Jell-O shot scores all day. They are going to need a lot of water.

How much are we ahead by on the Jell-O shots, Matt?

It will update at 5 p.m. Arkansas was ahead by about 700 at the last update.

My wife and I actually ate at Rocco’s today with some neighbors who drove up last night. The rumor was that they are running low on products because there has been such high demand for Jell-O shots this weekend.

To put it in perspective, Mississippi State fans set the record with 2,000-something shots over a two-week span last year. Arkansas and Ole Miss fans have both exceeded that record in three or four days.

Go Hogs, lol. We want to win everything.

I’ve heard someone walked in and put $900 down to serve Arkansas fans. 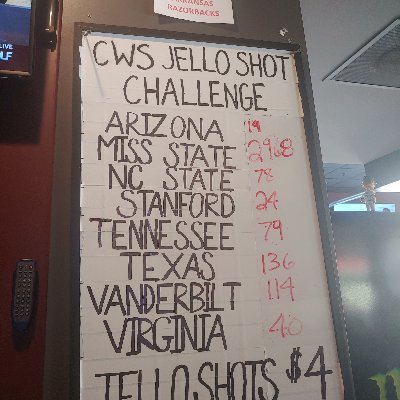 @CWSShotBoard
Welp! @BandedBrands just came through for @RazorbackBSB with the single biggest order of all time. Plenty of shots left though so come through! If you buy 25 or more leave your @ on the receipt and tell the bartender and I'll give ya a shout out when I can. https://t.co/anAWRt3okV 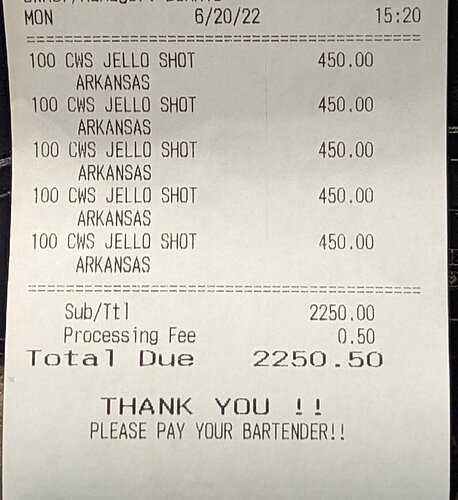 Yep. Been many a time when I was a Platoon Sergeant that I had soldiers do that the night before field training and then have to get stuck with an IV to get their stuff together.