Our team COULD NOT be playing worst. No movement on offense, missing free throws, missing layups, repeatedly unforced turnovers.

The officials COULD NOT be worse. Baldy is fair, the other 2 are clearly Valppo graduates

If we pay DECENTLY next half, should win easily

If we don’t stop the back door cut here. Sec gonna be a long year

Indiana is going to kill us next week.

We are not a very good team and these guys are playing their 3rd game in a week and they are out rebounding us and cutting to the basket open more times than not.

Been a couple of questionable calls as far as charge vs blocking with ref shirt too tight military cut. He is having a difficult time understanding the concepts

wow, the 2nd half remained painful for the first 17 minutes, about as fun as watching the Missouri football game. Joe couldn’t hit anything, including the front end of 1-1, followed immediately by another player missing front end of 1-1 on our next possession. Valpo shooting lights out, with their coach very animated, all just very obnoxious.

Then our team suddenly got resolve, the crowd was loud, forced back to back turnovers, hit back to back 3’s, and Adrio Bailey had an INCREDIBLE block-you gotta see it on Twitter/Instagram/youtube, whatever, just a great play. Joe and mason combined to hit about our last 8 free throws, and it was a rockin, screamin, fun victory. heck, we called the hogs in the crowd outside of the arena!

btw-if you’re in Argenta and hungry, Restaurante Capeo has some truly outstanding Italian-authentic, like they make their own pasta and bread, my goodness you’ll gain 10 pounds!

Never, ever thought Adrio Bailey would be such an asset, so happy for that young man.

Watching the game from a close distance, I was very impressed with our hands on the defensive end. Those two steals at the end that facilitated the win were lightening quick hands of Whitt and Joe.

We rebounded well against Valpo. We have tall guards in Joe, Jones and Whitt and a high flying Adrio and then Chaney, we will hold our own against teams like Valpo, who have players an inch taller than Chaney but they just don’t have any lift to bother us that much.

But the big story again was the clutch shooting of Mason Jones. He just has that “it” factor,

The two most underrated players at Arkansas this decade are no doubt Michael Qualls and Mason Jones.

Yes, Mason is some kind of clutch. He took a really nasty fall in the 2nd half. Looked like he hurt his lower back. I wasn’t sure he would be able to return after sitting for a few minutes. Thank goodness he was able to return. He’ll sure be stiff and sore this morning.

Have to give Valpo some credit though. They played good solid man D. They must have a pipeline to European recruits. They had 3 or 4 on their team. Overall they were a fundamentally solid team.

So, for the guys who had a chance to watch the game, how come the Hogs had 19 turnovers…I can’t imagine that the Valpo defenders were all cat quick and athletic?

As explained by Musselman afterwards, Valp played with heart and intensity. They played with a lot of fight. Muss didn’t think we matched their intensity in the middle part of the game. That was his explanation for the turnovers.

the turnovers were UGLY. sloppy passes, attempts at nifty passes in the lane that flew to the band.

Adrio had one with a couple minutes left, we had a steal and essentially a 2 on 1, adrio caught the pass, and just passed it right to the only defender, like he mishandled to ball right to the defender.

But I cannot recall any great steals by them, at all. just sloppy turnovers. really was an ugly 30 minutes in the middle of the game.

And Valpo really did play very solid D, always back on the break, stayed in front of us in good man defense.

And Valpo really did play very solid D, always back on the break, stayed in front of us in good man defense.

Perhaps a good opponent before Indy, then.

I was impressed that the Hogs seemed to regroup in the last 5 minutes. I’m not sure this team could have done that last season.

Muss will make this a good teaching game for the players… kudos for those at the game, crowd was crazy loud.

By the way, the crowd was tremendous the last 5 or 6 minutes of the game. Knowledgeable crowd also, as we were at our loudest when the Hogs were on defense.

Valpo actually had some quick little guards and the refs let both sides play physical.

I’m surprised they have the record they have. Looking at their schedule they only lost to Cincinnati by 4.

I have to disagree with Muss or his public statement on this.

Agree with Holdenhogfield that it was plain careless ball handling.,I didn’t think Valpo played that well. They themselves had sloppy turnovers and some bad shooting just like us. Valpo doesn’t have much besides Liberty, who himself was the reason they lost. Up five, he dribbled into a crowd three times and our quick hands took over in deflecting the ball, followed by Mason Jones threes on two of those steals,

Valpo did what we did at WKU with the same result. Up 8, they slowed the game, made disastrous turnovers and lost.

Could be a little of both.

Valpo’s sports writers, fans and coaches don’t agree with that statement. The link below is from the Valparaiso school web site. They thought they played well and with great effort and that this game has set themselves up to have a successful conference season. We’ve been turning over good teams in the last few games and taking care of the ball on our offensive end. This was probably the best they’ve played all season. And, yes, some of our TOs were self inflicted and careless. Many, though were caused by their solid man defense.

I would never say a kid who was the reason they were even in the game at the end with 21 points, 7 reb, 6 assts, and 4 steals, was “the reason they lost”. Without him they wouldn’t have been in the game and up 8 points. Yes, his late turnovers let us get over the hump at the end, but the loss certainly was not his fault. Also, I have to give our crowd a lot of credit for their late TOs. We were loud, crazy, and wonderful when the Hogs were on defense at the end. 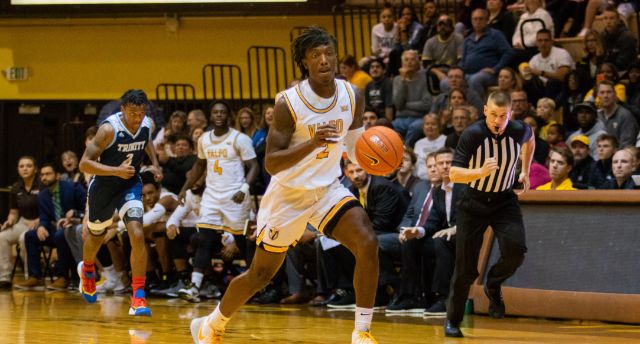