At the first scrimmage

The Razorbacks are scrimmaging at Baum right now. The pitching matchup is Connor Noland vs. Patrick Wicklander, and through two innings both have pitched really well.

The highlight so far was a relay throw by Robert Moore to third base that gunned down Jesse Pierce on a hard hit ball to the outfield. Moore was playing to the right field side of second and on the grass when he caught the throw from center fielder Curtis Washington. Moore’s throw to third was right on line; Jacob Nesbit didn’t even have to move, and Pierce was out by three steps.

Here is where players are playing today:

He will have very few peers defensively!if you watch that video I shared you can tell he’s been extremely well-coached and it’s been blessed with an incredible amount of quickness and smoothness and an absolute Cannon for an arm… I know Casey Martin is it shortstop right now, but we are going to be fine in the future with Moore

Noland and Wicklander both ran out of gas in their third innings. That’s kind of to be expected this time of year when their arms aren’t built up to long pitch counts.

I’m going to have more from the scrimmage soon.

Here is a more detailed write up on what I saw today: 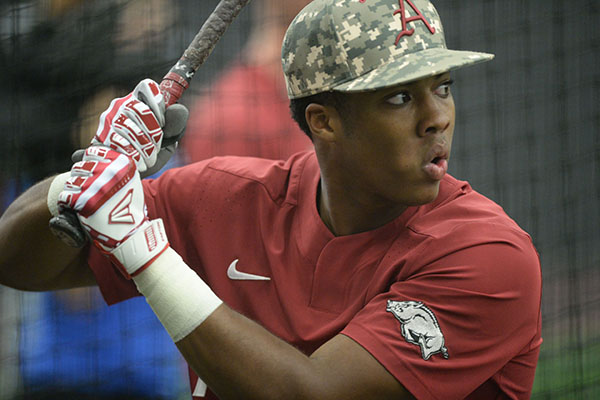 Observations from Arkansas' first baseball practice of the preseason

Great report! How was the control for Wicklander and Noland? How did Martin and Goodheart look?

It sounds like there will be a few battles to get in the lineup!
It will take some time to build up the arms where they can go beyond a few innings in an appearance.
I just hope they stay healthy. Man it’s nice for practice to start!

Number 32, Morris, (can’t remember his first name) was brought in to put out a fire. I was impressed by him. He reminded me of last year’s number 32. He puts his whole body into the pitch just like Cronin. I asked some guys after the scrimmage who looked like scouts how fast he was throwing and one said 91. I thought it was more than that. Just a big freshman, maybe with a future.

Morris fanned Washington to end that. Had him over matched. He did remind in Cronin a little bit. Same number too.

When I talked to Matt Hobbs in mid-December he told me to keep an eye on Morris, that he didn’t have a great fall practice but had looked really good in November and early December.