Some details and thoughts here from Mike Neighbors and other coaches in the state. 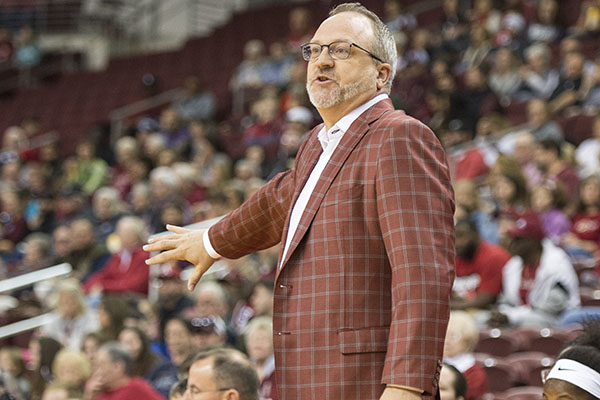 Razorback women will schedule all Division I teams from state

Arkansas' women's basketball team plans to play all four of the other Division I programs in the state beginning in the 2021-22 season.

I’m OK with the women’s basketball team playing those teams. I’m not happy with Mike agreeing to play the first game, or any game, of the ASU series in Jonesboro. I don’t think Men’s basketball and Men’s football (god forbid) teams should agree to play a single game in Jonesboro.

Gee, a home and home agreement.

Frank is rolling in his grave. As he should.

I have lost all respect for HY.

Quote from the UCA coach, “I think it’s going to help a lot. I realize they are SEC, but the thing is, it’s going to give us a little more exposure in the state with women’s basketball.”

This same applies to ASWho. Why do we want to help them recruit against us? WHY?

Arkansas and Arkansas State (or UCA, UAPB or UALR, for that matter) aren’t recruiting the same caliber of athletes in women’s basketball, or many sports really.

Mike Neighbors is recruiting McDonald’s All-Americans. When was the last time one of those players ever gave a first thought to Jonesboro or Little Rock?

Matt, you sure have the company line down! You and Richard just be twins.

Arkansas and Arkansas State (or UCA, UAPB or UALR, for that matter) aren’t recruiting the same caliber of athletes in women’s basketball, or many sports really.

Mike Neighbors is recruiting McDonald’s All-Americans. When was the last time one of those players ever gave a first thought to Jonesboro or Little Rock?

That is not true in all sports. Generally true, yes. But there are football players who both schools go after, I can remember a few basketball players over the years.

I just don’t see the point in “helping” anyone in the state. We are not at the top of the SEC, but we got as high as we are by being the only game in town.

Matt, you sure have the company line down!

I think for myself. I don’t have a dog in the ASU debate everyone has had the past week. But to insinuate recruits would choose playing in the Sun Belt over the SEC is crazy talk.

There is no question that the past week or so has been the biggest opportunity for instate schools to erode the state brand of the Razorbacks in my lifetime. And, it’s been done with the blessing and encouragement of the UA administration and media.

The media loves it. Certainly they have made it more difficult for UA fans and supporters in NE Arkansas especially. They will be taunted nonstop.

Time will tell. But, it will be interesting to see in 10-15 years how the Razorback programs are enhanced and received around the state as a result of this policy change. My bet is that you will see a marked increase of support for the other instate schools, especially outside NW Arkansas. It may even become fashionable to be anti-Razorback in places that now feature a majority of Hog fans.

We are told by even UA coaches that this should enhance the sports across the state. We will see. If so, and if it is also accompanied by a reduction in the overall level of support statewide for the Razorbacks then I hope they will be happy with it.

Trust me, the instate schools are exuberant.

But there are football players who both schools go after, I can remember a few basketball players over the years.

Every football player I can remember being recruited seriously by both has chosen Arkansas. Every single one. I remember a few who de-commited from ASU when Arkansas came along late in the process - Zach Hocker, Drew Morgan, Dre Greenlaw.

Every football player I can remember being recruited seriously by both has chosen Arkansas. Every single one. I remember a few who de-commited from ASU when Arkansas came along late in the process - Zach Hocker, Drew Morgan, Dre Greenlaw.

And I would like to keep it that way. That is my point. We don’t need to help ASU.

Matt, that’s correct with the exception of Jonathan Adams back in the 90’s. The question isn’t the one you asked. It’s not this year. You yourself admit the Razorbacks get most of the states top recruits. But, what happens in 10-15 years if that starts to differ as a result of the policy change? Instead of the UA getting 7-7, they lose 2. Then 3. And, if the Razorbacks continue to struggle in the SEC on top of the introduction of instate competition?

None of the other instate schools are a threat to the UA regarding recruitment of athletes. There are too many out-of-state schools farther up the food chain to be concerned about that.

There are too many specific issues involving this topic to address in a single post, but I’ll address 2 here:

LSU fans, in all sports, may temporarily receive some taunting when an instate school beat the Tigers. Any little brother will do that to the big brother after the occasional win. But both sides will always remember who is the big brother. I’m guessing very few Hog baseball fans are very concerned about taunts from UALR fans, in spite of the Trojans’ recent win.

Arkansas will forever be the big brother in this discussion. In all sports. Period. The onus is on Big Brother to keep getting better and maintain the chasm of difference between the two.

Men’s basketball could possibly suffer most here, particularly if we are routinely scheduling multiple instate games within the same season. Trading Northern Kentucky for UCA (this past season, for example) hurts your metrics. Even with relying on your typical conference schedule, you likely will need to add a P5 team or 2 to your schedule in a year that you play multiple other Arkansas schools.

I am not overly concerned about SEC level players in Arkansas choosing the red clay school over the Hogs.
However, I have no doubt there would be a decrease in avid support, including funds, if the two schools play
on the gridiron. Losing support and donations makes this a dumb move. People(avid support) and financial support are both finite and anything that moves either
from our side of the ledger to theirs is DUMB!

I think for myself. I don’t have a dog in the ASU debate everyone has had the past week. But to insinuate recruits would choose playing in the Sun Belt over the SEC is crazy

Certainly true right now. But the end game for ASU is to play schools like Arkansas on regular basis and win some and be an attractive add to a bigger conference. It looks impossible now but if you keep playing, it could happen in 10 to 15 years. That is the end game for most mid-majors. And when that happens, look out Arkansas.

I think for myself. I don’t have a dog in the ASU debate everyone has had the past week. But to insinuate recruits would choose playing in the Sun Belt over the SEC is crazy talk.

Matt, you may “think for yourself” on this issue but not very well. You miss the WHOLE POINT of not playing A-State. It’s not a fear of the possibility of losing to State or even necessarily losing recruits to them. The concern is the CERTAINTY of DIVIDING THE STATE. When teams play, Arkansans will be put in a position to PICK SIDES, which they haven’t had to do yet. Maybe we don’t lose the recruit on the east side of the state to ASU, but maybe that recruit watched games and found himself pulling for ASU because he knows someone on the team or just because he’s from that area, and he HATES the Razorbacks now. And people around him HATE the way the game with the hogs went and they now have strong negative feelings toward the hogs, and duh, he doesn’t go to ASU, but he darn sure isn’t going to be a Razorback either. Same for fans and others. I live in NEA and have been to plenty of ASU football and basketball games. Why not? But I can promise you if they start playing, I will no longer support a Razorback opponent, including ASU, in any way. See how that works?

I get that you’re kind of curious to see it, that you don’t really care about the Razorbacks, just an Arkansas sports guy - which is fine. But people with your mentality definitely shouldn’t be making these decisions on behalf of the Razorbacks. Unfortunately, it’s been people like you making decisions for the Hogs since Broyles was retired by John White and it’s a shame to see what Frank carefully put together being dismantled by obtuse eggheads who either don’t really get it or don’t really care.

Hoggle, your scenario could prove to be correct, but it is not a CERTAINTY (well, outside of your personal response). It is hypothetical. There are many such hypotheticals that get thrown around during this debate.

Personally, I don’t want the Hogs playing ASU in football, but I honestly couldn’t make a strong enough argument to speak in absolutes.