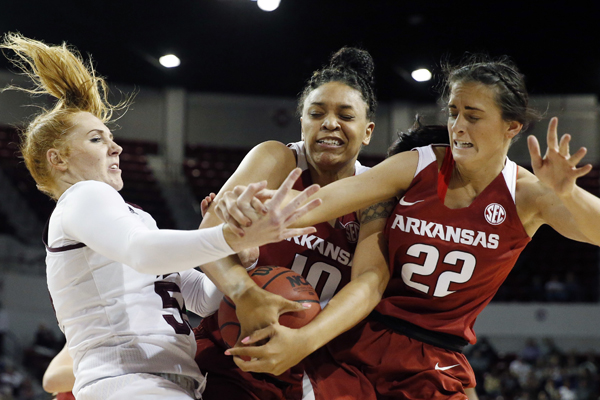 By David Brandt, The Associated Press

There were no huge emotions from Mississippi State’s senior guard. Just a few smiles, a wave, a hug or two and then a vintage performance that provided more than a few clues of how she piled up all those points.

“I just take the award,” Vivians said, “and move on to the game.”

Mississippi State (16-0, 2-0 Southeastern Conference) broke a fairly tight game open in the third quarter by outscoring Arkansas 30-18. Vivians made all seven of her shots during the run, pouring in 15 points.

“I thought Victoria was really special again just taking over the game,” Mississippi State coach Vic Schaefer said. “You can’t guard her when she’s in that zone.”

Vivians finished 13 of 20 from the field and had nine rebounds. Teaira McCowan scored 18 points, Blair Schaefer added 14 and Roshunda Johnson had 13 points and 10 assists.

Arkansas (10-5, 1-1) was intent on limiting McCowan’s impact in the first half, doubling Mississippi State’s 6-foot-7 center at every opportunity. That strategy kept McCowan’s numbers down, but it also left William open for 15-foot jumpers and she scored all of her 18 points to give the Bulldogs a 49-39 halftime lead.

“I didn’t hesitate,” William said. “I just took it and they went in.”

The Razorbacks were led Jailyn Mason, who scored 15 points on 7-of-11 shooting. Devin Cosper and Kiara Williams added 13.

Arkansas coach Mike Neighbors said he wanted to make life tough for McCowan and make William beat them with the outside shot.

“Morgan William played great,” Neighbors said. “We had a number in mind — I was going to make her make eight shots before we really changed defensively. Then she made eight in the first half. I thought she was phenomenal.”

Neighbors said he was pleased with large portions of the game, even if the outcome got lopsided in the final quarter.

“There are moral victories and we did a lot of really good things,” Neighbors said. “If I as a coach go in there and only pick out the bad stuff, then we’re never going to make progress. I do feel good. I’m getting on that plane very happy.”

“This group is a challenge,” he said. “I won’t make it, y’all. I promise you — 14 more games like this where I’ve got to spend the first half (coaching defense). I’ll be six feet under come March.”

Arkansas: The Razorbacks pushed the pace on offense and gave the Bulldogs some trouble, especially in the first half. Arkansas looked like it got tired in the second half, but for much of the night, it was an encouraging performance for a program building under Neighbors, who is in his first season with the Razorbacks.

As long as we continue to have difficulties with the front page portion of the website, I’ll post our new stories to the board in this format.