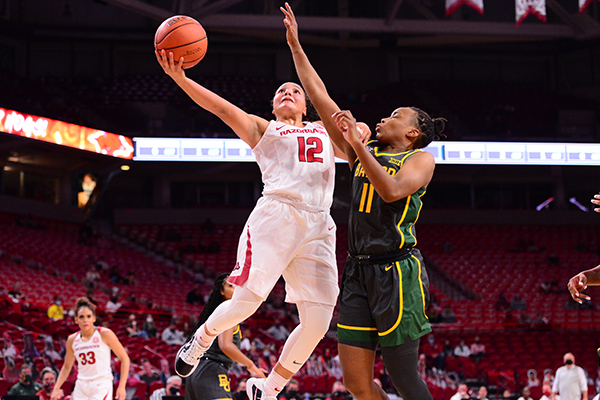 Amber Ramirez scored 23 points to lead No. 16 Arkansas to an 83-78 victory over No. 4 Baylor on Sunday at Bud Walton Arena.

That was awesome! Mike is a friend of mine and this is huge for him and the program.
So fun to watch if he ever can get a big in that can score and get the tough rebounds he will win a Natty.
We are playing with 6/1 post players that aren’t really posts. He lets them get out and run and every single player on that team today contributed. Great Win!!

WPS! Watched the game. Impressed our women were not intimidated by BU. They withstood all of the BU runs and finally put the game away in the second half.

A great win for the program. Too bad C19 prevented a big hog calling crowd.

I and my wife would have been there for sure. What a big win!! HOGS!

Was concerned about this game so early in the season.

Nice to see the Lady Hogs playing at this level against a highly ranked team, especially an old SWC foe.

When we missed those free throws, I got a really sick feeling. So glad we were able to pull that game out.

You know how you sometimes see someone or meet someone and you know immediately that they just rub you the wrong way? Kim Mulkey.

For those who have watched Baylor this year, was their dismal perimeter shooting norm for this young Baylor team or did they just have an off-night? In the second half, it seemed they were afraid to take a three.

I have met her. She’s very arrogant and not nice.

I think going in they were something like 2 for 22 from the 3 point line. I think that is what the TV commentator said.

Remember that Mulkey is the mother of that shortstop for LSU

Her son was the tiggers’ diva shortstop Kramer Robertson. We was arrogant and dislikable too.

Yeah, that was the Kim Mulkey Show. And there just happened to be a baseball game on in the background.

“Kramer just scratched his left butt cheek. Let’s check out how his mother, Kim Mulkey, will react to that!”

Two of the most annoying infielders in recent memory: Kramer Robertson and Kody Clemens. The commentators always spent more time talking about them and their lineage instead of the game.

Great win and big confidence builder.
They stuck to what got them the lead. Kept running and attacking and getting to the FT line.

Official attendance 2,633. Sunday evening probably a limiting factor (NFL and/or church) but not bad. Doesn’t look like there were weather issues.

My 12 yo daughter has become as big a hog fan as you will find. We drove up from Hot Springs to see them Sunday bc It was a big game. What a great experience! We went last year when they came to LR as well. If I lived closer, no question we would see most of them. She’s hooked now, her dream is to be a a ladyback!

She also got to take pics with Moses Moody and Alexis Tolefree. Both very gracious.

That is great. You are doing a good job with that future Ladyback (either on the floor or in the stands and classroom).

My Grandson loves The Hogs. First he sent a message to Clay to tell DVH he was committed (11 yrs old). Then, he wondered if it would be ok with DVH if he changes to coach Sam since he seemed to need more help at this time. I told him I was certain he would understand (really appreciate how serious he is about his word).

He better put Coach Muss on his committed list as well, just for reassurance.