Arkansas will have to pay up 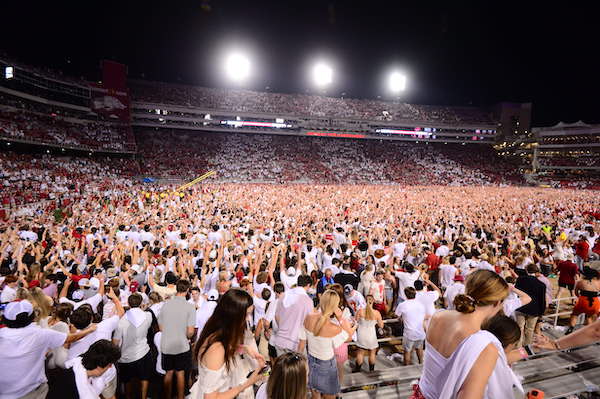 Arkansas will have to pay for its post-game celebration following a 40-21 win over Texas.

You reckon Hunter already had that budgeted?

Figure we will be on the hook for another when we pound Auburn, and maybe a third when we dismantle Missouri.

Could happen vs MS State, so better just write them a $500K check, just in case.

As I was leaving the goal post were coming down. Was that people pulling them down or were they taken down?

As an aside, we left after the clock hit “zero” but right then. There was almost NO ONE in the exit area. I took a picture and there were just a few people like us leaving the stadium and a few workers. I have NEVER seen that before after the game. It was weird!

They were lowered for safety purposes.

So are the fines cumulative over time?

I’ve read that the first fine is $50,000, so was that for storming the field after beating LSU under Bielema?

Well it’s worth the price to beat Texas!

There is a video of him talking to one of the security folks after the game. Appeared that they were discussing what to do about the crowd post game. Hunter said to let the go, that it would be more dangerous to try to hold them back.

Edit: Should have read the whole article before posting. I see Matt referred to this.

I like the multi game discount idea. As a life long Cardinal baseball fan , I met Bob Gibson in early 2000’s at Cardinal legends get together here in St. Louis. Tim McCarver , Gibson’s Catcher , was also there and they were telling a story of ump fining Gibson $50 for throwing at and hitting a batter in a heated game. Ump said it he did it again it would cost him $50 more, Gibson said (confirmed by McCarver and Mike Shannon who was also there), you get behind the plate, I have lot’s of $50 bills if that is the way you want to play it. Hogs fans will gladly pay those fines if the wins continue to be that large.

Yes. We were on double secret probation from a game seven years ago.

Since they’ve gone cashless at the stadium I think they need to roll out a bank of portable scanners for electronic payments and put them down there right below the student section, and just sell “post-game field passes”. All they need is a corporate sponsor or two-maybe they should talk to some of the Fayetteville bail bond places.

It’s cumulative. Every time it happens the fine goes up. We’ve had the LSU game in 2014 and I think one in basketball.

and I think one in basketball.

Wasn’t that the Michael Qualls Dunk vs KY?

Wonder if Jerrah will pay it, if we beat aTm? After all it’s his place.

Arkansas’ only previous fine for violating this policy was the 2014 LSU game.

I was thinking it would only be 25k

I don’t think we’re going to see this often. I hope not. Storming the field is dangerous even if it is understandable & probably a lot of fun. But it needs to be reserved for the rarest of occasions. We did it when we beat Tenn in 1999, but I do not recall another RRS storming of the field in my life. There might have been some, but I do not recall them. Well, there might have been something like that in 1981, the last time we beat TX in Fayetteville, but I don’t think it was anything like the '99 size crowd or the crowd last night.

I know hog fans rushed the field in the '78 Orange Bowl, but like I said, these need to be very rare events. In part they need to be rare because we need to get used to winning. We don’t need to do it again in 2021. No game by itself will duplicate this one in meaning. I suppose if we win out or beat MU to secure the SECW title, the crowd might go wild, but a regular season win over Auburn, MSU or A&M shouldn’t prompt tearing down the goalposts or rushing the field. Stay in the stands & enjoy the moment, but don’t go onto the field.

Field stormings in my memory:

You know when another storming in '21 would be worth it? Beating Misery to clinch an SEC West title. Ain’t gonna happen but it would be worth the fine.