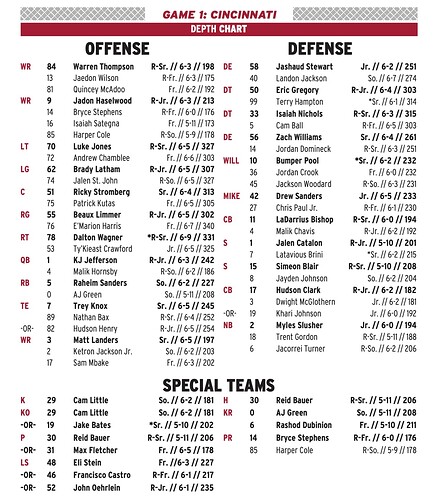 Thing that sticks out is the three true freshman on the OL two-deep.

Bright future on the line.

Sam Pittman says RB Dominique Johnson is going to get an increase in individual reps in which he’s cutting and having to make moves. Wants to see how he moves with the ball when it’s not “just run straight or go this way.” Nothing set in stone on when he may return.

Does Sategna have experience returning punts or kick offs? I was thinking when we signed him he might get a chance at those spots with his speed.

So I got a Depth chart question? If the competition for who kicks off is SO CLOSE, Pittman’s words, why would you risk injury to Little and not just let Bates kickoff? At least, his to lose the job if he can’t consistently kick out of the endzone or too deep to be returned. NO, I’m not concerned, it’s just a question.

Yes, a great haul in the O-line, but also at WR!

Richard’s comment gave me the thought to ask Sam about those guys. He called them the future of the program at the position. He likes them. They’re a little ahead of guys like Devon Manuel and Marcus Henderson right now because they’ve been pretty healthy and getting reps.

He may very well get a shot at either return spot. I like a full-speed AJ Green at KOR. Bryce Stephens just has in-game experience at PR, and Harper Cole is said to be very sure-handed, which is pretty important.

Thing that sticks out is the three true freshman on the OL two-deep.

Those three are going to be great linemen for the Hogs for a very long time.

Yes, a great haul in the O-line, but also at WR!

Good group but to have three true freshman offensive linemen in two-deep is very strong.

Richard, a small edit might be appropriate: it is very strong to have three true frosh in the OL two-deep when the OL is thought to be an elite group throughout all of college football.