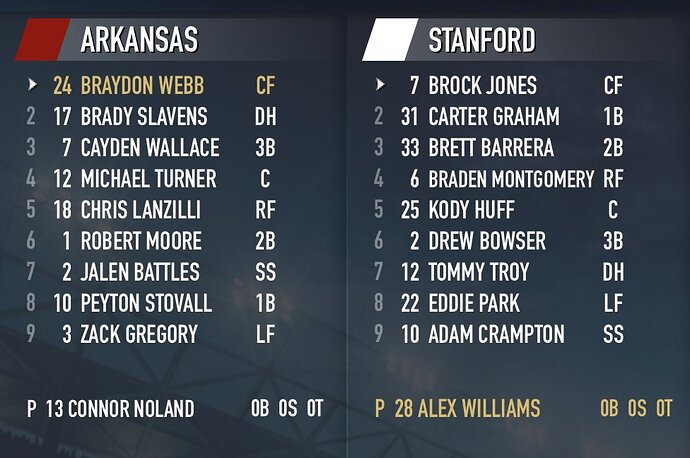 We have to have a great start from Noland, he cannot afford to get down bigand then let them bring in Matthews who is their Ace reliever. I think we can get to Williams we need to come out ready to go! Show him we can be a great offense!! punish him for the mistakes he makes and hope to get an early lead and let us control the rhythm of the game.

Per Tom Murphy tweets from the ballpark, the wind is blowing straight in at the Chuck.

And Muss is there.

That means both teams have to stray away from there go to way of scoring runs,I expect us to come out early trying to manufacture some runs if possible to get an early lead. Probably going to be low scoring because both teams rely on the home run so much.

They hit for much higher average than we do hopefully we can jump on Williams early with some good hits and get an early lead.

Well it is time to start working on moving another national seeded team to the loser’s bracket…WPS!!!

Wearing my lucky Hog baseball jersey. But I’m not superstitious.

I’m wearing the same shirt I was wearing in Chapel Hill last Saturday. But at least I washed it…

I wonder if Perry is in town?

Probably, he seems to make it every year.

That is amazing how he continues to be selected

About six inches from leaving the yard

Way to put the ball in play Brady

Live stats officially suck. They seem to be run by the NCAA and have not updated since the triple.

That obviously caught him in the right hand