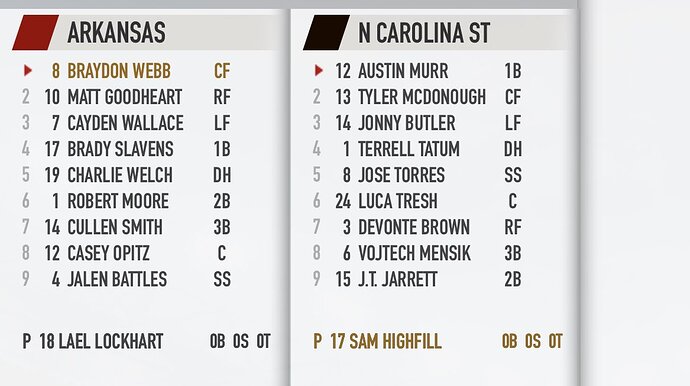 Big start for Lockhart, we really need to find out if he can get out very good hitting team… Was not sharp at all last week 4 in 8 hits 5 runs… I expect NCS to be very aggressive bc they saw Wick yesterday and kind of know what to expect and they were embarrassed yesterday. Will come swinging from the heels trying to put up crooked number.
I think they will try to get their starter to go 5 and then turn it over to those 2 left-hander to see if they can close this out so we need to get the lead by 5 so we can bring on Kopps

Wonder if the heat will play a role for NCS?

Van Horn said on the pregame show that Franklin feels “a lot better” today and might come into the game later.

The wind is blowing out toward right today. The ball was jumping during batting practice.

It was hot in Hoover. As hot as this today at Baum.

We have kids that have played in this heat b4. Lots of southern kids.

The game will begin on ESPNews.

Let’s go boys! Let’s jump out early for a change.

So our baseball game got booted off ESPN2 for a Finland/Denmark soccer game!!!

So ridiculous! Makes no sense

Cant believe we keep getting kicked to the curb…television wise for any other reason in the world to do so.

And, that damn soccer game is just starting.

We are the #1 team in the nation and the #1 seed of the tourney and we keep getting the jack boot and bounced around… Why the hell can’t we get on the major channels like the others and not get booted. Total BS!!!

That soccer game will have more eyes than our baseball game.

And the reason it is still going is because one of the players collapsed during play. It’ll be over with in a out 20 minutes, and we’ll shift back to the deuce.