Here is the live updates blog from the front page: 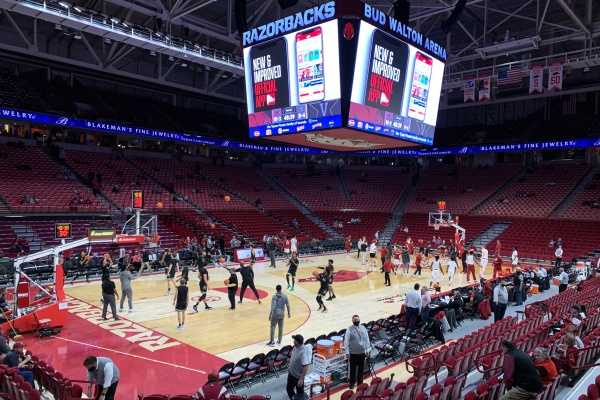 Follow along for live updates, stats, notes and observations as the Razorbacks host the Commodores in Bud Walton Arena.

Terrible start. 2 turnovers and give up 5 points because of the turnover.

That was a push off and a flop.

These officials are terrible!!! He wasn’t set.

Williams and Devo are supposed to be leaders.

Their doing pretty good at the moment.

The defense is better, but the officials have bailed Vandy out a couple of times resulting in points.

They are. 1 steal, 1 turnover for Williams. Devo hadn’t got a stat. He’s on the bench

There you go there’s some defense J Will

Pippen Jr. has been pushing off all game and only been called for it twice. These refs are going to lose control of the game if they don’t reign Vandy in on that.

Awesome defensive posession by J Will and JD

Are you freaking kidding me…
How many times are we going to give up a layup off an out of bounds play!!! Unbelievable

Good first half. I’d be happy if I was Musselman in the team. If the officials hadn’t gifted Vandy 10 points, Arkansas would be killing them right now.

But he broke the cardinal rule when you’re guarding the inbound, he was looking at the other players instead of the guy with the ball and he didn’t jump on the pass.