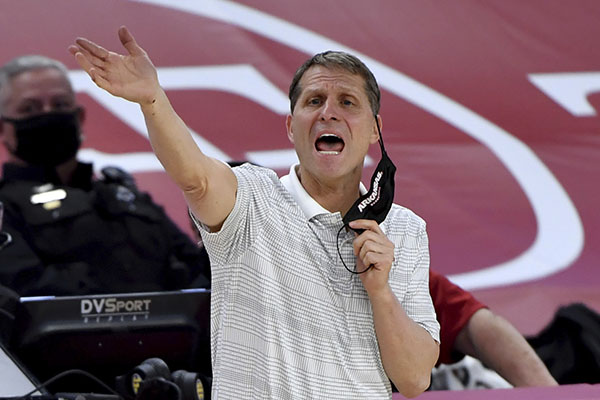 Arkansas' home basketball game against Texas A&M on Saturday has been postponed due to covid-19 protocols within the Aggies' program.

Stinks for us. Probably the most winnable game left on our schedule. Likely would have gotten us to 7 - 4.

Hopefully will be rescheduled

Gives extra time to get a few guys healthy, and extend the game prep for the Wildcats.

Agree, probably a game we would win…… but, never count out a Buzz Williams coached team.

Great time for some key pieces to heal: 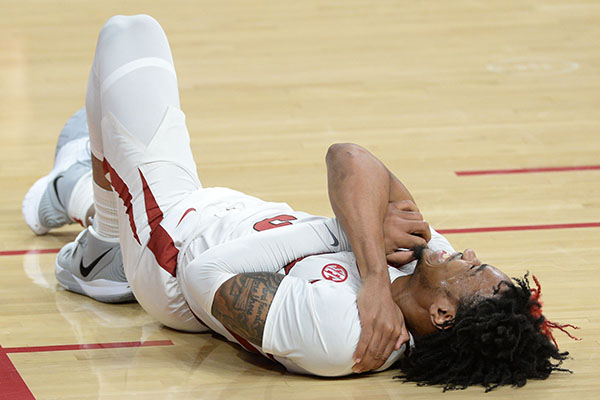 The postponement of Arkansas’ home game against Texas A&M on Saturday could be advantageous for the Razorbacks.

Until you said Hogs will use time to heal, I was going to say can AD pull off magic like he did getting the women UConn by getting Gonzaga this weekend. Gonzaga was trying to schedule Villanova but fortunately for Nova, Georgetown was open. Hogs upset Zags in Bud Walton would be the men’s version of beating UConn for the women.

AD pull off magic like he did getting the women UConn by getting Gonzaga this weekend.

By all accounts that was Mike Neighbors who put that game together. Yurachek just gave the OK and signed the contract. He said he thought Neighbors was kidding when he approached him about the idea.

Maybe when Muss was at Nevada, he was around Coach Few of Gonzaga. I was just thinking of way to get thrill of beating UConn high for men over Zags. I wouldnt now since we got injuries to heal. I am sure Zags wont hit road this weekend.

By the way Matt, did you see Cade botch last shot in tie game by shooting with 11 seconds left instead of under 5 seconds. TCu scores an and 1 to win.

Is getting a replacement game for Saturday even being talked about? What Coach Neighbors did showed stones the size of boulders, and got the ladies a ton of national pub. Can Muss pull off something similar?

Musselman said Arkansas won’t schedule a replacement game, in part because they have already played nine nonconference games and the NCAA set a maximum number of games this year at 27.

The women’s replacement game was different because Vanderbilt ended its season. The men could still play Texas A&M twice.

With no open dates left on the schedule, is there actually any possibility at all of this game being rescheduled? A&M was already 2 games (both Vandy games) short before this postponement.

Since missed games are so prevalent right now, maybe the NCAA will decide to move both the conference and National tournaments ahead 2 weeks. Giving 2 weeks time for postponed games.?

With no open dates left on the schedule,

There is an open date for everyone: Saturday, March 6. The fact that A&M has multiple games to make up complicates things, though. But maybe A&M could play two makeup games, say Friday the 5th and Sunday or Monday. Where A&M is in the conference standings, they would have to play Wednesday in Nashville.

Here’s an idea: A&M could play Vandy on Friday in Reed Arena, play Monday in BWA and then proceed to Nashville. If the A&M-Vandy game had been scheduled in Nashville it would have been even easier: Go to Nashville a couple days early and play at Memorial Gym.

On the women’s schedule, the SEC has been juggling games, but of course the difference there is that Vandy has shut down entirely. Our women’s game with TAM was moved up a week as a result. Maybe there could be some juggling there to get A&M another game once they resume playing,

This may work out for the best. Giving the walking wounded time to heal and get some rest!

This may work out for the best

Could be. A&M at home is the kind of game that doesn’t really help you if you win (Quadrant 3) but is really bad if you lose. Even on the road it’s only Q2. Heal up and get ready for Kentucky, which is on the cusp of Q1 (they’re 77th now).

I have found something that says all they’re really using NET for is to create those quadrants, and you’re then assessed for good wins/bad losses on the basis of those quadrants. But a high NET alone means nothing except to the teams that play you.

It’s just weird the way the Net works.
I wish they would just go back to RPI.
There’s nothing to gain from Playing Texas A&M. Those 2 games are minefields.

I wish they would just go back to RPI.

True. I’m just not used to it. Especially the way the Big 10 uses a 20 game schedule to cut out 2 non conference games and it improves the NET for the entire conference.

Especially the way the Big 10 uses a 20 game schedule to cut out 2 non conference games and it improves the NET for the entire conference.

If we played 20 SEC games it would likely do the same. The ACC, Pac-12 and Big East also play 20 games. The Big 12-2 just plays a double round robin which is 18 games as well. So we’re the only Power Six league that could play 20 and doesn’t.

I looked at Mike Anderson’s schedule at St. John’s. They played Boston College and BYU, and scheduled Texas Tech (cancelled due to COVID). The rest of their NC schedule was junk, but that’s two more “name” schools than we played in NC. He also has one more Q1 win that we do after last night.

Frankly I’d be okay with 20 league games. Start league play for a week in mid-December, break for Christmas and then get after it again just before New Year’s like we do now with the 18 game plan. I’m good with getting rid of games against Mississippi Valley and Lipscomb and replacing them with the Rebnecks and the Poultry. A 20-game schedule would be seven home-and-homes and six one-game-onlys. And I think it would improve the league’s position with the selection committee.

Well boo hiss on that. You’d think a school that prides itself on having a student body ready to suit up at a moment’s notice, would relish the chance to play us with recruits from the intramural league.