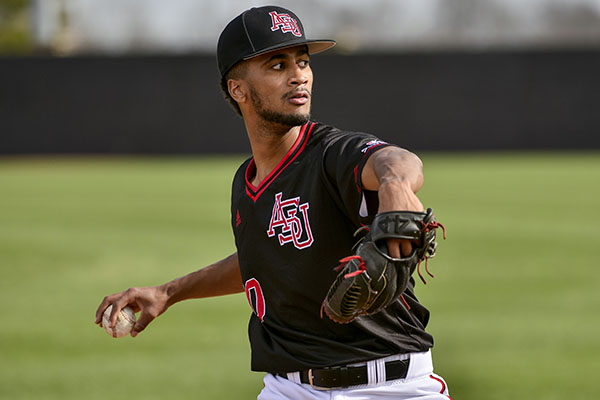 Arkansas vs. Arkansas State: How to watch and listen, forecast, pitching...

Everything you need to know about the Razorbacks' midweek game against the Red Wolves.

If you missed it, I wrote last week about Arkansas looking at Jaxon Wiggins as a starter. 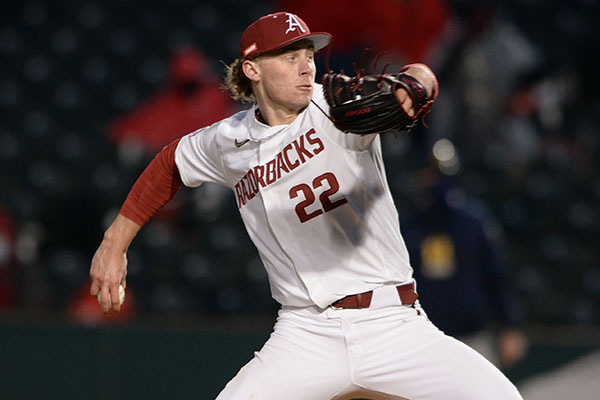 Arkansas fans might see right-handed pitcher Jaxon Wiggins at the other end of a game soon.

Would be a good game for him if we can play.

Don’t you put that JuJu on me Matt! I had tickets to the Mo. St. game and I have tickets to this game, I need this one!!

Now that we’ve made the terrible decision to play them, I’d just as soon play the game, especially this year, when we ought to beat them badly. Of course, we know DVH will treat this as a run-of-the-mill midweek game that has no importance except for player development during the heat of an SEC race & hopeful run to Omaha. That’s exactly what he should do. However, you can bet that no other game matters to ASU. They’re not going to the NCAAT absent an unlikely win of their conference tournament. They’ll give everything they’ve got to beat us. Fortunately, I doubt everything they’ve got is enough to beat us or even come close to us unless we make a bunch of mistakes like we did against UALR a couple of years ago.

I would like to see it rained out-every year.

I get your point. Hard to argue with it.

Was it ualr that made a pitching change every inning and it kept us off balance?

Some people are scared of their own shadow. The players at ASU don’t have the hatred that both of their fans do, lol. They’ve got several Arkansas kids on the team, I bet several pull for the Hogs, when they can. I remember when they had a QB from PA, not the Hatcher kid, he tweeted out support for Hunter, or someone on our team. Now, their two fans didn’t like it, but I’ve known several of their players across several sports, there isn’t some built in rivalry, or hatred.

As I have stated many times, I am all for in-state competition.

I don’t think it has anything at all to do with fear. I won’t repeat for the umpteenth time why I don’t think we should play ASU (mostly in football & basketball, however), but it never had anything to being afraid of them. I’m sure you’re right that many players don’t have the hatred for us a lot of their fans do, but when I was a kid & rooted for both teams, one of the first times I realized how deeply the hatred ran in some ASU people toward the UA ran was when I heard an ASU football player trashing not only our program but individual players on our team.

However, I remember the incident you mention. I don’t recall the name of the ASU player who did it, but I think he congratulated Hunter Henry, his HS teammate for having a good win or something to that effect.

I make no apologies for loathing ASU’s program. It’s sports. It’s one of the things we get to do. I don’t have any personal animosity toward any of their players, however. I’ve heard a lot of ASU fans make really crappy remarks about players on our team. I no longer read their board, but it was not uncommon to read such remarks back when I did.

There’s plenty of crappy statements by our fans on different boards towards ASU, who was this football player that made the remark? You shouldn’t have a problem telling us, since you loathe them.

What is to be gained by playing ASU? NOTHING good except maybe some practice of game situations for players that normally don’t play much.

It hurts our RPI, it hurts our ELO, it hurts our Strength of Schedule, and it give us most likely a quadrant 4 game. If we lose, its a double whammy on those same numbers.

Now that can be said for most of the cupcakes on the schedule. But we have not had many of those this year, even our cupcakes seem to be doing well in their own right.

But I’m old, stubborn, pig-headed, and a whole host of other descriptors.

So I’m gonna fall on the old Frank Broyles tradition and say DON’T PLAY IN YOUR STATE TEAMS. No point in helping prop up another brand within your own back yard.

When Auburn or Bama paid Jonesboro Tech to come in and take their whuppin’, the Alabama money spent just as nicely at ASWho as our money would have. “Keeping the money in state” is a bogus argument. They’ll find someone else to pay them for their thrashing if it’s not us.

I don’t object to playing in-state games in minor sports, up to and including baseball. And I don’t mind playing UCA or UAPB in basketball or football. But if we never play the Pink Pups in hoops or foobaw it’s fine with me

I don’t know how the state’s economy is affected by in-state competition in non-revenue sports or in baseball. In those sports the cost of travel is a major part of the cost, so I can see how short trips from Conway, PB, LR & even Jonesboro save money. However, it’s not a factor at all in football. ASU brings as much or more money back to the state when it plays another P5 program as we pay out of state cupcakes. The “keep the money in state” argument just doesn’t work.

I agree with your other points. We gain nothing by playing in-state teams.

Arkansas is playing the in-state teams because they are easier to get on the schedule. They also probably don’t require as much of a game guarantee because of the shorter travel.

But first and foremost it is due to the convenience of scheduling. Dave Van Horn has said many times that midweek games are the hardest to schedule, especially in the second half of the season when teams want to play home games. The Razorbacks were able to knock out six midweek dates this year against the other four Division I teams. I suspect it will be a comparable number moving forward.

The only objection I had to playing instate teams in baseball, etc was that people would use that as an excuse to play in football & basketball. Now that Rubicon has been crossed. I hope the game with ASU is a one-off & that we win by a big margin so that perhaps it will silence the calls for an annual “rivalry.”. If the game is close or heaven forbid we lose, I’m sure that’s exactly what we’ll face.

If we must play in-state schools in football & basketball, I’d want to treat ASU, UCA & UAPB equally—as one of the annual rent-a-wins that rotate on the schedule. Last thing I want is to treat ASU as our equal. That’s is their goal. It shouldn’t be ours.

Losing to any team that’s quadrant 4 team will hurt our record. So, in your way of thinking, we shouldn’t have scheduled UAPB for 2 games, or Grambling for 1? I guess we should be thankful that the Grambling game was rained out, huh? DVH wants to play them, he’s wanted to schedule them for years, so that’s good enough for me.

Dudley, just because you’re for it doesn’t mean you’re right! No gain for the hogs.