As expected, this year’s game has officially been moved to Black Friday again. It will kick off at 2:30 p.m. on CBS on Nov. 25. 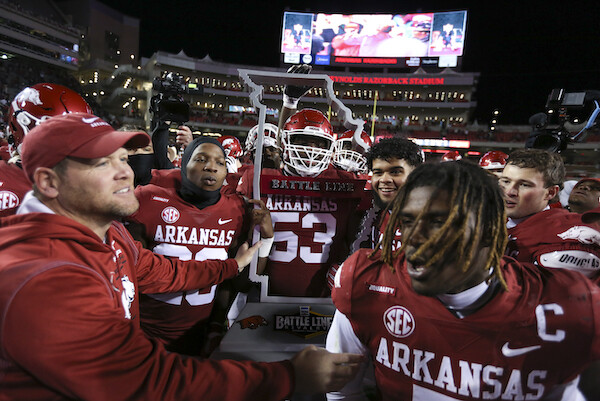 The Arkansas-Missouri football game will once again be played on the day after Thanksgiving.

Conflicting with USA-England in the World Cup. I may be dual-screening it.

Whatever happened to playing them at Arrowhead? I was looking forward to making that trip.

I know COVID required it be moved to campus last time.

I guess it went away when we switched from LR to Fayetteville for our home games with Mizzou?

Arrowhead was a 1-time deal. I guess they could do it again at some future point unless Dorkwitz runs them even further into the ground.

The Arrowhead game was not tied to the War Memorial game in any way. It just so happened that both teams were interested in playing a home game in more populated areas because of attendance issues on campus during Thanksgiving weekend.

Missouri signed an agreement to play two games at Arrowhead, one of which was against Arkansas in 2020 and the other against a nonconference team at a later date. You are correct that the 2020 Arkansas game in Kansas City was called off due to covid-19 and moved back to Columbia.

I don’t know whether Missouri intends to try to play there again. I am confident Arkansas does not plan to play SEC games in Little Rock anymore.

Absolutely. We play Misery every year. We haven’t been in the World Cup since 2014.