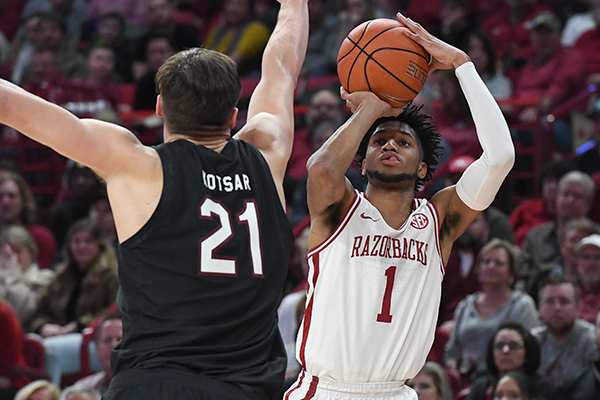 Arkansas' sluggish start is not overcome by a late rally and falls 79-77 to visiting South Carolina on Wednesday at Bud Walton Arena.

Non-coach gets technical foul that was the difference in the ball game. Wow…this is how you get back to being a non-tourney team…and fast.

We came out Flat on both ends of the floor dug ourselves a hole, let them get confidence, and we never could catch up.that’s imo where we lost us the game. This team has enough experience to know better.

Dig out of a hole time after time only to commit a live ball turnover to give them a darn dunk or layup! The sorry cross court pass that Jones let loose was just stupid! Everyone is talking about his points he had 7 turnovers all by his lonesome self! There’s you one for Ripley. Jones needs to value the ball!

At several points last night the hogs as a team failed to get their hands up on players shooting the ball!

There must have been a lunar eclipse
Last night South Carolina shot 17/33 from the free throw line! They are poor shooters at best. Yet that matches what what they shot from the field aided by dunks and gimmies around the rim. They threw up shots last night that in other games this year are bricks only to have them fall! That’s the best they’ve shot the rock all year!
Rebounding was dead even and we get beat! Turnovers were dead even at 16!

Ugly horrible game! Send that support staff guy packing! After the way the ref let Martin by with barking without giving him a T it’s funny how one of our support staff gets one!

Rim protector would be a difference maker on this team.

We still can’t make free throws!
26/40. While I love the fight the hogs show it would be nice for the fight to start at the opening tip until the final horn. Digging holes and getting down
Is killing them! The first 5 minutes of the game is really where we lost this game.

Army we shoot 74 percent as a team for the season. Well above average. That’s what we are, not last night’s aberration. To be sure that aberration along with a technical on the bench cost us the game.