Arkansas is No. 10 in this week's coaches poll

Oklahoma and Texas are ranked this week. Arkansas is one of 11 ranked SEC teams. 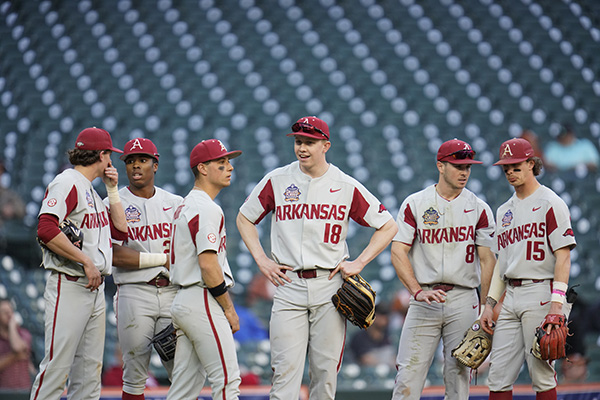 Arkansas fell in the USA Today coaches poll Monday following three losses in the College Classic, but didn't fall far enough to break its streak of weeks inside the top 10.

If we don’t play any better that ranking won’t last very long.

Defense needs lots of work!
The bats need to wake up and they better learn to take the slider in the dirt.

I keep trying to tell myself that a 3 game losing streak against top competition this early in a baseball season is just no big deal, but I admit I’m a bit low right now.

Look back at the rankings on April 1st!

I hate all sports right now, but it’s early in the week.

And if they play better, they will go back up. Things to fix and I figure Dave Van Horn is the right man to get them fixed. He took on this challenge to figure out the issues that needed to be fixed. That’s why he gets the big bucks.

By the way, I don’t let results get me depressed. I’d be a mess. I guess I just look at it as it’s a twist to a season that will make it all relevant at some point.

I’m disappointed about last weekend but with my coaching background I do realize there times in baseball where you just get in a funk and can’t quite get out of it for 2-3 days, that’s exactly what happened. There were very good positives that I saw from the pitching staff which was by are the biggest concern coming into this year. I now believe that shadow of a doubt Vermilion is are closer, I saw it enough from both Ramage and Bolden to think that we can have a better-than-average 3rd starter…
I’m not worried about the defense at all that will be corrected, the offense has tremendous capabilities and we’re clicking on about 6 cylinders, there will have to be adjustments made as far as pitch recognition goes,they have to get to where they can realize what is a strike and what is not, I think that will happen fairly soon… there is no dominant team in the SEC West right now, Texas A&m got brought down to earth this weekend as well, Mississippi state is missing some key players, LSU is pretty good but they are not as good as us in my opinion. Ole Miss’s very Scrappy but I don’t think they can beat us on our best day… I’m looking forward to seeing how we get the kinks out of the rope

They have a new tool to help in pitch recognition. It’s virtual reality google. It allows them to see pitches and then know where they are going to locate. I’ve never looked through one, but I know the technology that continues to evolve is going to be amazing stuff.

That’s good,hopefully it will help us.I remember what Hank Aaron said when he was expecting to get a Slider,He said if it starts out inside of you that he laid off it b/c he knew it would probably be a ball, but if it was coming at him or slightly behind him he knew he could hit it…makes sense to me,The balls we were swinging at were starting in the middle of the plate and ending up 1 ft off the plate.I really think this past weekend will be a great teaching tool for the players/coaches.

After loss to Illinois State, we will no longer be in the top 10. I figure we’ll fall to around 20 or maybe lower.

Definitely not. Losses don’t cause you to drop that much in baseball.

Just need to win the rest of the games this week and we won’t drop.

We’ll see. If we keep playing poorly, we definitely will free fall that much.

LSU had a 500 record, with multiple midweek losses and only dropped like 5 spots. Not too worried about it.

If we lose out this week, then yeah… we will free fall.

Yes, we need to start winning.

We went thru a 4 game losing streak last year and did just fine after.

We’re now at a five game losing streak and the last two loses we’re against less than stellar teams. I think the team’s confidence is shaken and yes, they can overcome and have a great year. However, both the pitching and hitting are suspect during critical times. This season could easily spiral out of control and they could end up just like our football team under J L Smith. Let’s hope they have the grit and determination to overcome and go out and play winning baseball the remainder of the season.

I have lots of questions and not many answers. I still believe this team has more potential than it has shown. Heck, we were ranked No. 5 in the coach’s poll in pre-season. Before the season started I was a little concerned that our pitching might not be up to the previous years, especially Friday night pitching. Now I am still concerned. When we get into the SEC we will see how good our pitching really is.