Arkansas is getting another early enrollee

Dylan Leach is a junior catcher from Carthage, Texas, and plans to enroll at the UA this summer. I spoke to him and one of his high school coaches today. 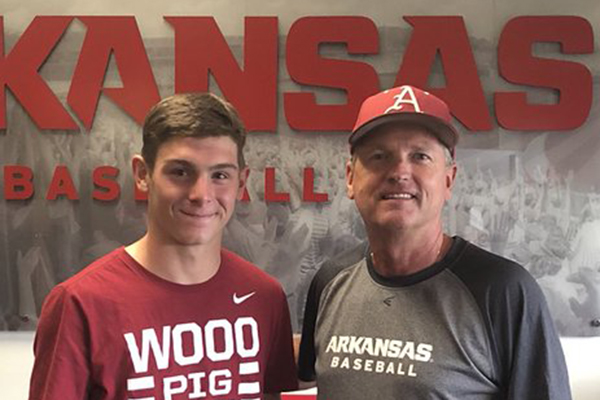 Dylan Leach observed from afar as freshman Robert Moore quickly grew into a valuable player on the University of Arkansas’ baseball team this year.

Still have to fix the roster crunch. That is going to be a very real problem. There is real sentiment that there will be several lower level or mid level D1 programs that could be cut in next few months.

Will he contribute this coming year… is he anywhere near the player Moore became so fast?

I like his optimism. Sure hope he does well. The catching backup play last year wasn’t wonderful. Not sure that a catcher who can’t reliably catch by now will be able to next year. Scary.

Will he contribute this coming year… is he anywhere near the player Moore became so fast?

You have to remember how good of a player Robert Moore was projected to be; we’ve known he was elite for his age for quite some time. What he did this year is a high bar for any player, and even then there was no guarantee that he was going to sustain that level of play his first time through SEC play.

I think how soon and how much Leach plays depends on a lot of factors. First, obviously, is whether Casey Opitz is drafted or returns. How does Leach acclimate to college? What kind of improvement have Cason Tollett and Dominic Tamez made?

The catching backup play last year wasn’t wonderful. Not sure that a catcher who can’t reliably catch by now will be able to next year. Scary.

Tamez struggled this year, no doubt. What the fans didn’t get to see in a game was Tollett catch. I saw him several times in practices and scrimmages, and he was a lot better defensively than Tamez. Tollett is a better receiver and looked more accurate to second base. Tamez’s biggest plus is his arm strength, coupled with his hitting ability.