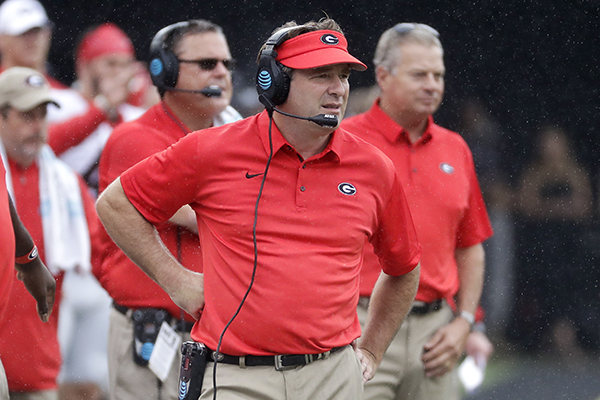 Arkansas will add Georgia and Florida from the SEC East to its 2020 football schedule, but the Razorbacks are still awaiting their finalized schedule from the conference office.

Was there any doubt?

I expect our first 4 games will be some combination of UF, Bama, LSU, UGA. That way if the season gets cut short, we’ll have faced the four toughest teams on the schedule. Our last 3 games will be OM, MSU & MO.

I told someone the day after the polls came out and it showed 6 SEC teams in the top 13 and Arkansas was playing 4 of the 6 that the SEC in their infinite capacity to screw the Hogs we would end up with the other two teams. Guess what… all speculation was Georgia and South Carolina, but instead we get Georgia and Florida. In the history of following the Hogs for 50+ years, if there has ever been a way for us to get screwed, somehow it would happen. That streak continues. So in honor of that even I crafted up this little graphic.

Just as I thought, and prolly the #1 toughest schedule in the nation. Just what we need.

I agree. I think the early games will be brutal and defeat this team mentally for the rest of the season.
I can’t see a single win. That’s low, low. I miss looking forward to arkansas football, I’ve never dread it more than I do right now.

Big screw job. Whatever. I’m ready for 2020 to be over. Maybe Sam can work a little magic. I’d be elated with 4 wins. Elated.

sec west football is as sec west football does. get in your corner and cry and then go home or buckle up your chin straps and dig in. Somebody’s gotta do it and it might as well be us as anybody Get your attitude right and GHG!!!

It’s obvious the SEC is trying its best to win another National Championship. The top teams got the breaks on the additional games while schools like UA and MO got screwed.

As others have said, one huge, favorable swing could be produced by a few of these teams having multiple players out due to the virus when playing the Razorbacks. I don’t want any of these young men to get sick, but at the same time you play the hand you’re dealt. In this day and age, the virus is the wild card.

I hope the players don’t read and even worst than that, digest all this pitiful defeated before we put our helmets on BS.

Look on the bright side. We ain’t lost a game yet.

Is it coincidence that the two bottom teams in each division, Arkansas and Missouri drew the two top teams in the other division, Georgia/Florida and LSU/Bama respectively? Oh yea I guess I forgot Vandy but Missouri is pretty close to bottom.

Who did we piss off at sec hq? Good lord. Alabama draws vandy? Sure…

Biggest screw job since the Florida with Teebow gamee. They could have at least spread the top 4 among the bottom 4 instead of double stacking us and Mo. I havent looked but Im sure the Texas television market was somewhat protected. Ugh