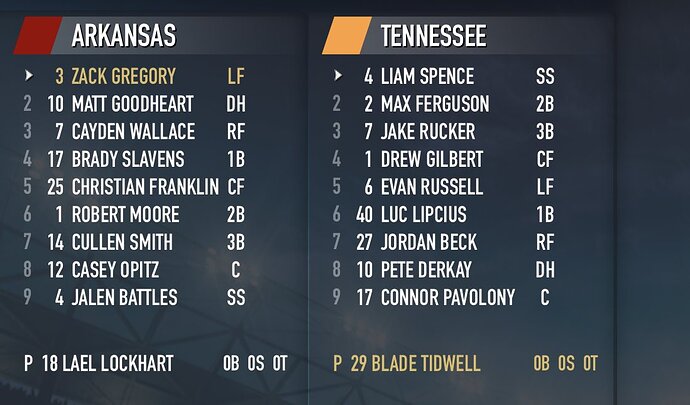 They are starting a Fr who has been hit hard by the better hitting teams, Bama, Fla, Vandy, Tam all had lot of hits and runs off him,This will be the biggest game of his life hopefully we jump on him early. I feel Goodheart breaks out today.

Crap thought that was gone! Goodheart should have scored! And then gets gunned at the plate…golden opportunity once again wasted

Damn. I just knew we’d score in that inning. What a way to get that pitcher out of trouble.

Yep, that was his best opportunity.

Goodheart should have scored on the Double!

How many outs have we made at the plate last few weeks?

But I have no problem with trying to score there

Game of inches from being up 2-0 smh

Well, Lockhart had a good 1st inning & didn’t take many pitches to do it. The TN pitcher used 16 & we were hitting him. It’s early, but except for blowing the scoring opportunity, I’m pretty happy with the start.

Two quick outs on us in the 2nd, though. Surprised Moore took that last pitch.

Right down the middle Bob moore

Hardly
It was borderline inside
Still too close to take

Yeah most LH like inside pitches, what he hit out Friday

Good hustle & good catch by the TN LF to make that play. I was hoping Opitz could string out that AB & get on base.

Guess it wasn’t the strike he wanted to swing at.