UNC was extremely slow to put up their lineup, but finally got it done. 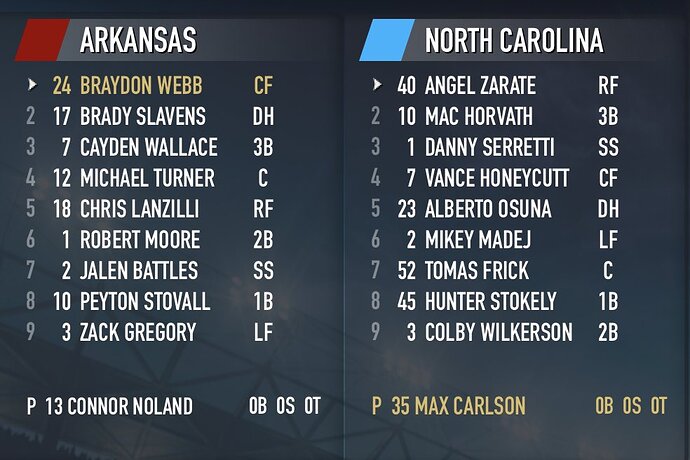 I got up early walked 4.5 miles I’m ready to to watch ball all day…
This is a huge game, almost a must win, IMO we don’t want to put our season on the line having to beat that side winder LH for them… I hope we see the Connor we saw last week and also the offense we saw last week. We will need both of those things to win this series.

North Carolina likes to jump on teams early they score in the first inning quite a bit I would love to flip the switch on that come out swinging boys.

It’s a hot day in Chapel Hill. There is some cloud cover, but it’s mostly sunny and humid.

There is a lot of red in the stands. Arkansas sold its allotment of 600 tickets and many more bought through the secondary market. In a 4,100-seat stadium, 600-plus really stands out. There are also some people watching from lawn chairs through the right-field fence, and even more watching from the top of the bleachers in the field hockey stadium beyond the right-field wall.

Arkansas is in its gray jerseys and red hats today. UNC has white smocks over blue shirts, white pants and white hats.

Which way is the wind blowing Matt?

We don’t see too many of those days.

We’ve hit the ball hard so far, but unfortunately at the fielders.

Connor has to really be sharp in the first inning these first four guys are really good for them they jump on teams quickly. This is a big inning right here.

I noticed that. I thought Turners would have been long gone in several parks. But it plays big for NC, too

I just cannot understand why our hitting coach is unable to teach our batters to see an extreme shift and hit into the weak spots. Especially for players with major professional aspirations.

Their hit was on the ground to RF instead of in the air. Thought we might get the DP, but at least got the lead runner

Everything he’s throwing is up. That is not going to be a pretty sight against these guys especially the guy coming up right here Honeycutt

Uh oh. Runners on the corners with just 1 out. Now we need that DP

In my professional arm chair position I think we have the wrong starting pitcher today. We shall see. Settle down Conner!