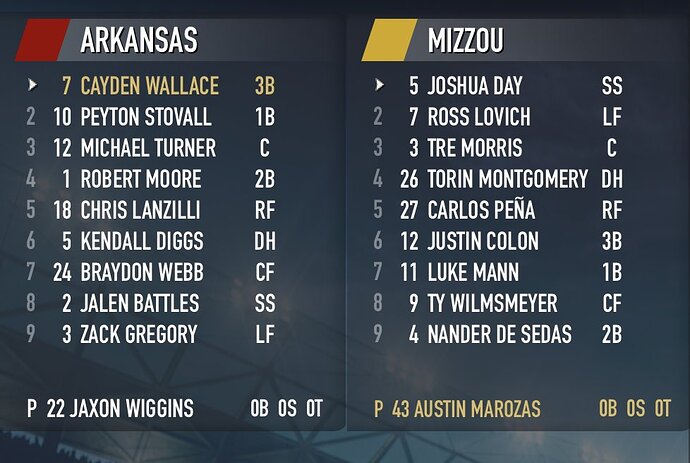 I really like Kendall Diggs I think he’s going to be a great hitter for us. He has a great approach and a great swing.

Right now having anyone in the lineup and see Slavens sit one out is a good sign. He needs to stop pressing.

They said 39° Marty on the broadcast. Either way definitely not a warm day

Yeah we don’t have anybody swinging the bat real well. Only had the barrel of that three times yesterday and a couple of those were home runs held up by the wind but no we look really bad at the plate so far

Yeah, I copied that from the game notes. It’s gone down each time they report it.

In this cold weather I’m not suprised
When the weather warms up I think the hogs will crank it up. .

Man, maybe it’s just me, but it sure seems like there are a lot of hitters getting hit by pitch this season.

Hope he gives us that outside pitch…

I swear this team drives me crazy! Second and third one out and we can’t get the ball out of the stinking in field! Yeah that ball is a little bit off the plate but with two strikes you know he’s throwing you away you got to be expecting that at least swing at it and try to file it off don’t let him give you a chance to ring you up like he did.

Hate leaving 2 on after getting them on with no outs. Surprised DVH decided to bunt them over.

Terrible at bat by Battles. You can not take that pitch. But the bat on the to the opposite field. These guys are not situational hitters

Meanwhile, softball vs LSU is on ESPN2. We beat the Corndogs yesterday and lead 2-1 in the 5th now.