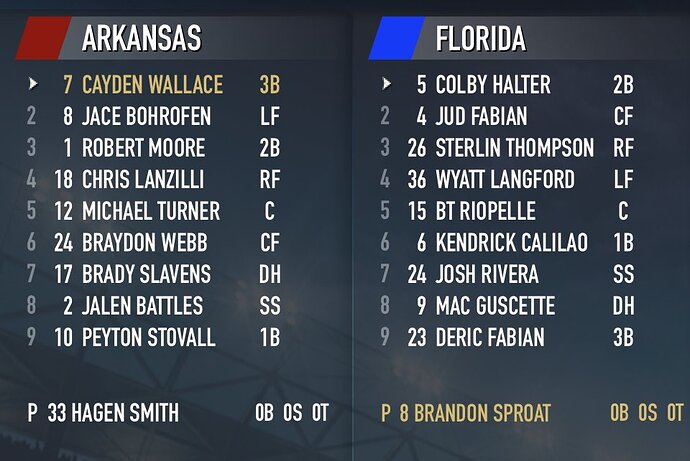 Okay boys let’s come out swinging those bats, get some runs, so Hagen can settle down and have a smooth easy 1st inning

It would be nice to jump out early and put The gators in a hole! Knock the starter out early too! Make them use the bull pen as early as possible.
If Hagen Smith can go 6 it would be nice.

19 mph winds blowing out. Probably going to be some runs score tonight. He struck out the side. Not many good swings against him in the first inning. He’s throwing hard 98 mph

Yes. It the hogs won’t get the homers going stilling out!

It would be nice to jump out early

We take too many first pitch strikes for strike one. And, we swing at balls on strike three. Argh. This is why we are lower tier in BA.

I am guessing these announcers are Florida guys?

Yes this is their broadcasters

Stinking Pop up double. I could tell that was going to be trouble and a pass ball looks like we’re going to give them a run in the first inning… Incredible catch my web though better get the ball down Hagen

Pop up double and a wild pitch sac fly first run and then a Homer. Hogs down quick 2-0.

Probably not. But it’s got us this far into the season

Hate giving an early lead, especially when you just give one

I am guessing these announcers are Florida guys?

Mick Hubert has been Florida’s football play-by-play man for decades. He is calling the game tonight.

Yeah I think he does a good job

Yes sir! Don’t wait to go down in the count.