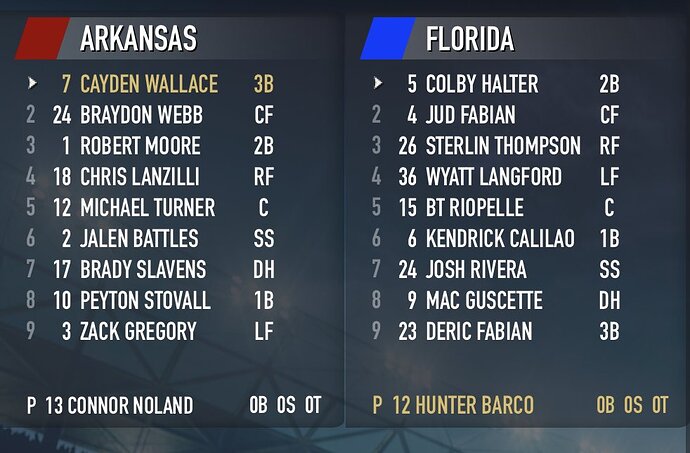 Has the makings of a pitchers dual. Their guy will be the best we’ve seen, really tough against LH, hopefully he’ll make some mistakes and we can take advantage. They hit a lot of home runs so we got to keep the ball down and keep it in the ballpark.

You would hope that with Connor pitching to contact, they would get ground balls rather than long fly balls.

I sure hope so. He’s been keeping that breaking ball down and that’s very tough to elevate for sure

Well the first Florida batter sure took the right approach. A little lucky. That pitch must have been too good for a 2 strike pitch.

Great pick up by Turner!
Easy tag out!!

Turner is not seeing the ball well at all… I think he had two hits last weekend and that was awful at bat right there,but this guy is extremely tough on LH hitters. He held a very good hitting LSU team to two hits in seven innings

This pitcher is pretty good

Battles gave it a ride though. Long out

Yes sir it was. The pitchers dual is on!

Noland is pitching well through 2 innings!

OK guys, I’m not trying to be mean. But we are watching a duel, not a dual. My dog is a dual champion (2 titles).

Yes! Noland has his command. One mistake by either pitcher could be the difference in the game.
The Florida starting pitcher needs to learn that people can lip tead and his comments after that strike out were totally unacceptable!

Barco apparently had a few choice expletives as he left the mound.

I guess that I missed that. That’s just rude.

I’d like to see him take the ball to his nasty mouth.