0-0 going to the bottom of the second.

Facing a junk baller K two to three batters he faced. Wiggins a little bit erratic in the first BB one but got out of it much sharper in the second with three ground balls

1-0 Hogs Diggs with a bullet base hit to right scoring Moore who had a clean single and advanced a second. Kid has a very good swing.

Wiggins has got through three. Kind of been all over the place Has 2 BB thrown as many balls as he has strikes but has worked around them 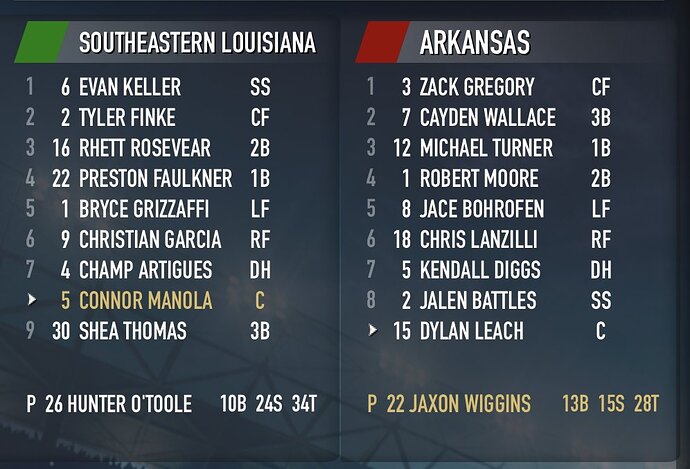 2-0 Hogs lanzilli doubled in Turner who had walked and moore had a base hit to to get him to second. Had runners on 2nd and 3rd with one out but couldn’t get the big hit again

Lead off walk for Wiggins again that’s his 4th. 64 pitches 34 strikes 30 balls.wow then gets a double play. Ground out to second ends the inning.

Well we shot ourselves in the foot had runners on first and second Gregory gets picked off a second then turner. grounds out. Just unbelievable how how much this team keeps the opponent in the game

Gotta be smarter than that. Opportunities are there, we just fail to take advantage.
Our pitching has been pretty good but with our lack of run production, it may not be good enough to hold up a 2 run lead when we get into SEC play.
Don’t know if we’ll score more than two in this game when we squander opportunities.
As I post this , SLU gets a HR. Good thing no one on base.

Way to go Robert! That’s how you hit the ball!

We badly need Moore to score and at least get the run back we lost last inning. Now on 3rd with 0 no outs. Surely we get a run here

A big inning here would nice.

At least we got the run back. Disappointing we didn’t get more.