Are there any whispers about names in the transfer portal?

Who could join us for spring practice?

That’s not a whisper, he’s in the fold. I’m talking about people who haven’t announced yet.

We could really use Palaie Gaoteote IV from USC at LB (6-2, 250). And has anyone heard anything about Netori Johnson from Georgia? There are two TE"s from Tennessee in the Portal. They were both 4* and both 6’4" about 245. And what about the OLB from Michigan?

Obviously Pittman and his staff know exactly who they want and what positions they’re looking for. We’ll just have to be patient and see what they get.

Rather have Ryan Anderson and Keir Thomas for the D-line.

I found Keir Thomas. But, where do I find Ryan Anderson?

OM, he was committed to us, but we moved on from him, I’ve read he’s going to Rice, anyway, nothing official.

“names in the transfer portal?”
I have been wondering too. Since CSP made a comment in a press conference about looking for OL/DL (either 2/2 or 1/3), I have been checking the transfer portal. There are about twenty former 3* OL, seven 4* DL (including Johnson from Jawja and two from Clemson), and a lot of 3* DL. I don’t recognize any from prior recruiting by the Hogs or from hearing the name during games.

I expected at least a rumor or two about Johnson, given his connection with CSP.

Keir Thomas was recruited way back in the day by UA. Bielema era recruit, not sure Pittman was around at that time.

Ryder Anderson was committed here for a while, IIRC.

Those are two that would help our current DL mature without being exposed on the field.

Keir Thomas was recruited way back in the day by UA. Bielema era recruit, not sure Pittman was around at that time.

Yea Keir Thomas was Class of 2016. Pittman left after the 2015 season, so he was around for the recruiting.

I thought I remembered that Thomas’ name.

Highly unlikely, since they would have to walk-on until the start of 2021-22 academic year.

Any chance we go after Arik Gilbert, the TE from LSU? That dude would be a huge get and much needed depth in the TE room.

So you’re saying there’s a chance!! 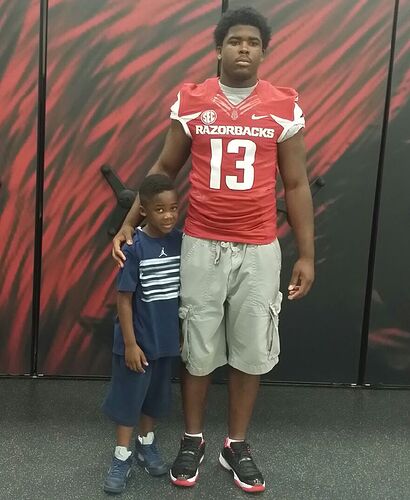 Miami Central defensive end Keir Thomas is sorting out his list of schools to determine where he'll play college football.

I clicked your link, RD, and exactly none of the stories that came up on the first three pages mentioned Keir Thomas.

You’re right. I clicked on twice and it went to other stories. Clicked once and it had all the stories about Thomas from the past. I replaced it with one and his little bro.

There are two TE"s from Tennessee in the Portal.

Lots of players entering the portal from UT. Trouble is brewing…internal investigation around possible recruit violations. Some think AD Fulmer is looking (hoping?) there is a “with cause” issue that will allow him to unload Pruitt without paying the typical god-awful buyout. Nobody’s really heard much from JP lately.

Smoke is boiling out of Neyland. Tee Martin and another coach have not had their contracts renewed which are up next month. It appears they are gone. And the administration is not allowing coaches to be hired right now. And it seems to me they are looking for a reason to let Pruitt go without paying his contact.