not Hog related except the Manning name and KJ going to camp at the Harvard of the South in Thibodeaux. Arch rebuffed both GA and Bummer, and he is inarguably the #1 recruit in the country: 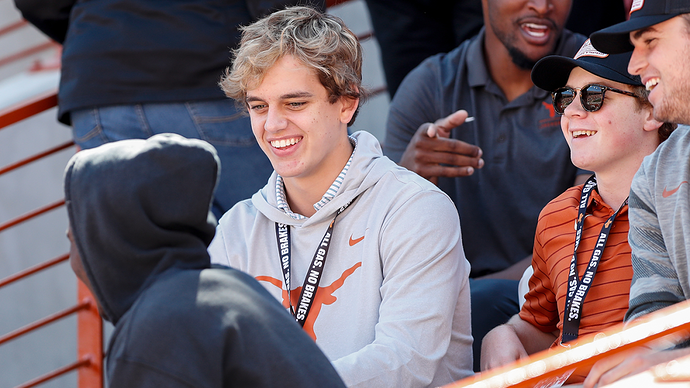 Manning is viewed as a program-changer, which is exactly what Texas and coach Steve Sarkisian have needed

I’m sure the family is hoping that young Manning does better at Texas than Phil Simms boy did.

Makes no sense. But I’m glad we will never get to see him.

Head scratcher…Sark may not make it through the year if things don’t drastically improve in Austin this fall. Man, I thought GA was going to get him.

Well, you have to be in college three years (which can include a redshirt year) to go to the NFL. Year 3 for Arch is 2025. The Fallopians will be in the SEC in 2025. Now will we have to play them that year? TBD.

Also have to consider if Sark manages to calm the natives in Texas and is still there in 3 years. If he is not and in the age of the Transfer Portal, we have no idea where Manning the younger could be. I’m not even sure The Shadow knows.

It only has to make sense to young Manning. Surprised, yes, but makes no sense?

I have always liked the mannings… until now.

I have always liked the mannings… until now.

I liked 'em till it became I couldn’t watch a game without seeing a cornball Manning commercial.
Even in fast forward which I always do for commercials

I heard that but I’m pretty sure Georgia and Alabama got some of those dollars as well.

In typical UT fashion, their fans have already forgotten about the other #1 QB that’s a redshirt freshman on their roster, old Quinn what’s his name…

Three more seasons in the Orphan Eight, then they join the SEC on July 1, 2025. Unless they buy their way out sooner.

Since Houston, UCF, Cincinnati and BYU will be in the Big XII beginning July 1, 2023 I would not be surprised if a deal gets done for UT and OU to slide over to the SEC at that time as well.

I think they want to squeeze EOE and Zero for as much of those buyout fees as they can. So no sure a deal will get done…

Coukd be a game changer for Sark and the Longhorns. Should improve recruiting dramatically.

At my 50th reunion at Tulane lunch at Galatoire’s I sat next to a friend and neighbor of Archie and Olivia Manning. Her son and Cooper and another guy own the Pontchartrain Hotel and its restaurant, the Jack Rose, where my wife and I celebrated the reunion by having a Mile High Ice Cream Pie like I used to have 50 years ago. She told me Cooper’s son was the #1 prospect in the country (as if I didn’t know).

Had no idea Arch was thinking of going to Texas. If so, I would have tried to persuade this fellow Tulane grad to try to use her influence to stop him before he made this disastrous decision

Btw, she said Cooper’s main job is managing his brothers’ money. With a full time job like that, no wonder he had no time to talk sense to his son

. Hope when Texas plays us, if he is still there, Arch’s decision making is just as bad as it apparently is now

Exactly. All we know for sure, is that young Archibald will spend the Fall of 23 in Austin. Maybe. Or maybe not, if things don’t go well for Sark this season.

I’m a little surprised daddy and grandad would encourage him to play for Sark! This is another good reason why Texass should have never been let in. They will recruit now to SEC and eventually imo will be another Bama in recruiting…taking whomever they want and letting UA, TAMU have the rest.