Leads Utah Valley 3-0 with about 20 minutes left. Playing solid. Our goalkeeper has been mostly an observer so far. Hope she is staying awake,

I guess the goalie did fall asleep.

guess the goalie did fall asleep.

In fact, Ms. Warner was fantastic in goal today. Think Colby may have found his GK going forward.

She did play well the last 20 minutes. Also drew a red card when a UVU girl assaulted her.

Play again Wednesday in the round of 16.

For just our 2nd time in program history.

Have never made the Elite 8 before.

Yeah, Warner had to work hard in the second half as Utah Valley opened up their offense as expected trailing 0-3, even with a red card. She played well. 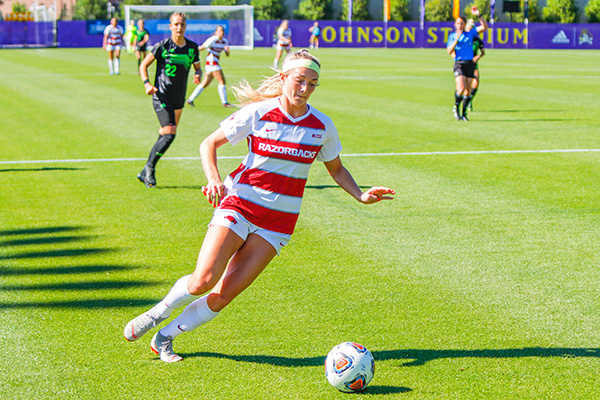 Parker Goins scored two goals to help Arkansas to a 3-1 win over Utah Valley in the second round of the NCAA women's soccer tournament on Saturday.

NCAA bracket says Wednesday’s game will be at Wakemed Soccer Park in Cary, NC, same place they played VaTech in 2018.

We’ll be playing (11) Santa Clara in the Sweet 16. They dominated Ohio State 4-1 earlier this evening.

Other games of interest today:

Wow the Santa Clares dominated The Ohio State University. Yeah that one. They must be really good. Kinda knocks a little of the lustre off our socking it to the Utah Valley PTA, doesn’t it?

Doesn’t mean tOSU is any good in women’s soccer. Or the Big Ten in general. You can only play who the bracket puts in front of you. Seems like we have someone on the board whose daughter played at Santa Clara (@azhawg maybe?). Interesting to hear his take if so.

Santa Clara is the No. 11 overall seed in this year’s tournament.

Condescending as usual Swine? Saint somebody?

The year Santa Clara won the women’s national title, 2001, the conference championship came down to the #1 Broncos and the #6 ranked Saint Mary’s Gaels. Santa Clara won 1-0 on an Aly Wagner free kick from about 35 yards out, in about the 85th minute, upper V. Our all conference goalie got her fingers on it, but couldn’t deflect it all the way out. It was a remarkable shot, and I don’t think Wagner hits it more than once in 20 tries, but sometimes the soccer gods are unkind. (Ironically Santa Clara would go on to eventually beat North Carolina 1-0 in the national title game.

It was a heartbreaking defeat for our girls who went on to get to the Sweet 16 for women before falling at Stanford. The foul was committed to prevent a 1 v Goalie breakaway. It would never happened but for an injury to one of our central defenders and players had been moved around a bit.

When I think of that day, well… we try not to think of it in this family.

Not being condescending at all, Jim. Just remembered the wrong Catholic school.

No worries! Santa Clara is the arch enemy of Saint Mary’s, in any sport. When they both played football the called it the 'Little Game" in the Bay Area, as Stanford and Cal is the 'Big Game"

There was a time when suggesting that maybe T played for Santa Clara would be fighting’ words! LOL