Any insights re Walker White after this weekend?

Saw on Twitter that his parents accompanied him to The Hill and saw some pictures with CSP and others, so just curious if we gained any insight on his recruitment.

His parents and brothers made the trip. JD was there with his future wife.

Pittman and Loggains were at his game on Friday. Pittman told him that was his first HS game to attend as the HC. That scored some points with him.

They went out to The Blessings to see his dad’s All American plaque before the game.

He’ll go to Ole Miss this weekend. He hopes to attend LSU, Bama and Florida games.

got our work cut out to get this kid as high profile as he is and sure Saban will be on board before it over,would love to get him but not holding my breath.

Thanks for all that info Richard!

He’s a big-time talent I would love to have him! Go get him Sam!!

I would keep an eye on Bama. Things might heat up pretty quickly at some point.

Yeah he looks exactly like the kind Alabama’s been signing. But got 2 more years, so lot can happen in that time

That seems like the old way to think. I think Sam and his coaches give us as good a chance as anyone. I am not sure what other QB’s we are recruiting for that class, but I would give us a great shot here. 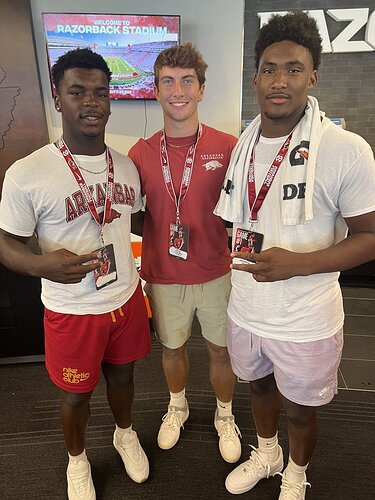 Future of our team in this pic.