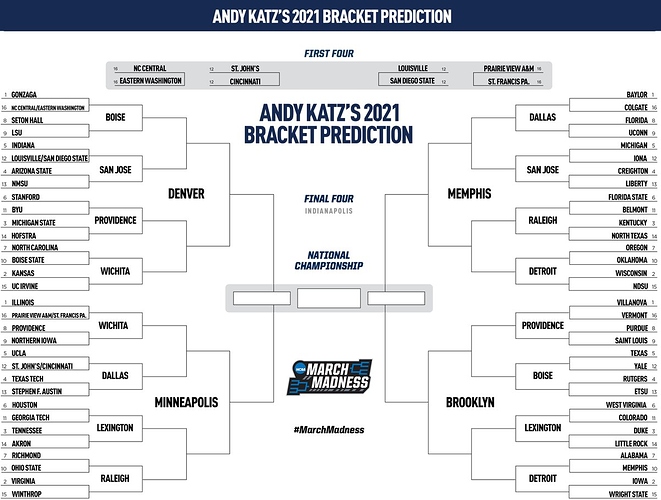 "🚨 BRACKET PREDICTION 🚨 With less than 2 months until opening night, @TheAndyKatz gives us his FIRST prediction for the 2021 field of 68! 👀 👉 https://t.co/C2ZNmAs6S3 https://t.co/7Z4SJJqc64" via NCAA March Madness on Twitter

Katz is a goober! He loves him some Coach K

I’m going to go with ESPN’s Mr. Brackets himself, Joe Lunardi. He has us as an 8-seed. I’m hoping even his number’s a little too high. Love to see a 4-6 seed at season’s end.

I said 8th as well, hope ur right though.

Despite losing Joe to the NBA, I think that by the time of the NCAA, tournament Coach Muss will have a very dangerous team that will compete and win several games. Of course, you never know what seeding and opponent you will have. With Joe, I thought that we could be an Elite 8 team with a chance to go to the Final Four. Without him, I still think we have a very good chance to advance to the Sweet Sixteen. This team appears to have some very good players. The team has size, basketball skills, and a large number of players that have a lot of game time experience. The big question is whether Muss can blend them with the young talent. If that happens, they will be a fun team to watch and they will have a decent run in the Tournament.

Regardless, Razorback Basketball will survive and likely earn a bye in the early rounds. Hope all this stays on track so we can have a good, fun team to watch and cheer for.

I do believe this team will be fun to watch play with same energy as last year with a deeper bench this year.
8th seed or better I’m thinking as well, if they really start to gel late, who knows.

Regardless, Razorback Basketball will survive and likely earn a bye in the early rounds.

Bye? Are you talking about the SEC Tournament? The only bye in the Big Dance is the 60 teams that don’t have to go to Dayton.

I think we are going to see this from a lot of pre-season predictors. I think we will also see this as SEC media votes.

Predictors outside of Arkansas are going to judge this team in pre-season on where we finished last season, who is returning and if we have immediate impact recruits.

Well, we finished 11th in SEC with Joe, Mason and Whitt. We have just one player returning that made significant contribution. And other than Moody, there is not an immediate impact freshman recruit and none of the transfers have been big impact players on the team they are coming from, and some of them with good stats are coming from mid-majors.

Andy picked only five SEC teams for NCAAs. I don’t think SEC media is going to pick us in Top 5 either. I think 7 from SEC will make NCAAs.

But, this is pre-season. It is under our team’s control to determine where we are seeded. Time to prove everyone wrong.

I myself will be happy if they just make it into NCAAs. I think they need to finish in Top 7 in SEC.

I myself will be happy if they just make it into NCAAs.

I also will be happy (or at least fine) with an invite to the Dance. This team is a pretty big mystery going into the season. For the team to be what I hope they become, they will look very different from last years team. If Joe had come back, I think they would be competing for the SEC Championship.

Last season, we obviously were a guard dominated team. Our 2 leading rebounders were Mason and Whitt. For this team to be dominate, we will need to flip our rebounding +/- stats from last year. I think that is possible.

I see some “Virginia” in this team. We can be a very good half-court defensive team with the length Muss has assembled and the transfers he’s brought in. Personally, I believe Muss is a terrific defensive coach and we saw some of that come to fruition last season in the half-court. The obvious big question is, will all these new players buy into the huge defensive effort that Muss will be demanding?

I expect, and the Hogs will need, big seasons from Desi and Moody, and not just scoring. We will need outstanding play from our PG position. Hopefully, one of KK, Davonte, and Tate will grab that spot early and become an outstanding leader for the offense.

At this point in time, I feel pretty certain we will become a tournament team. I also believe this team can have a very high ceiling if the young pups mature early and the transfers buy into Muss’ defensive requirements.

Fingers crossed, but I look forward to this season getting here! It’s going to be exciting.

He’s been watching too much Hog football…