And the little AAC shows the mighty SEC how it should be done!

There has been much angst around the SEC for its very poor job if officiating for several years and this year seems to be the worst by any measure. What does the SEC do? They spin and spin and spin and weave a tale that always says what happen was right. Even when the world can see the kernals of corn exposed in the poo they are trying to sell us and tell us its just dirt. They are pitiful.

Along comes the little ole AAC. They have a major screw-up in the East Carolina v Tulsa game. What do they do? They own it. They admit they screwed up and it cost the other team the game. They go on to say final scores are final and there is nothing to be done, but try to do better. Still they admitted it and owned it!!

“The American Athletic Conference has acknowledged an officiating error that occurred in the fourth quarter of the Oct. 30 East Carolina-Tulsa football game."

“After reviewing the video of the play, the Conference has determined that the judgment of the replay official was incorrect. The ball carrier did not regain possession of the ball, and the ruling on the field awarding the ball to East Carolina should not have been reversed."

The SEC could learn a lesson from them. People would still be mad, but I don’t think it would be carried around and talked about so much if they would just admit it when they screw up. But they won’t and thats the lesson they need to learn.

Here is the article that covers the AAC admission/story: 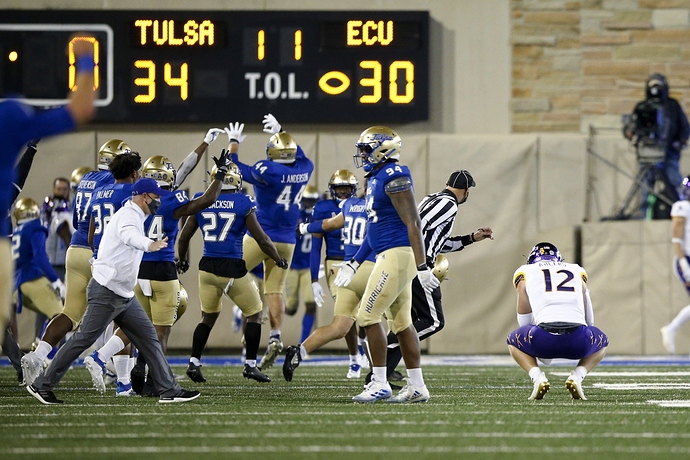 East Carolina lost a 34-30 decision at Tulsa on Friday. But according to the American Athletic Conference, it shouldn't have. The league issued a statement Saturday acknowledging an officiating error that took place on the Golden Hurricane’s final...