Proud of them. They must be coming on like gangbusters. Here’s the summary from last night on the Razorback website: “The University of Arkansas gymnastics team was firing on all cylinders tonight, posting the third-highest team score in program history in its 197.425 – 197.250 loss to the No.1 Florida Gators in Barnhill Arena on Friday night.”

Believe me, posting a 197 this early in the season is huuuuuge! Bama has won two straight while posting in the high 196s. Teams generally have higher scores as their teams season during the year. So, the gymbacks have the mettle to compete against anyone in the SEC.

So glad Marty and Clay had the opportunity to go see them last night in Barnhill. 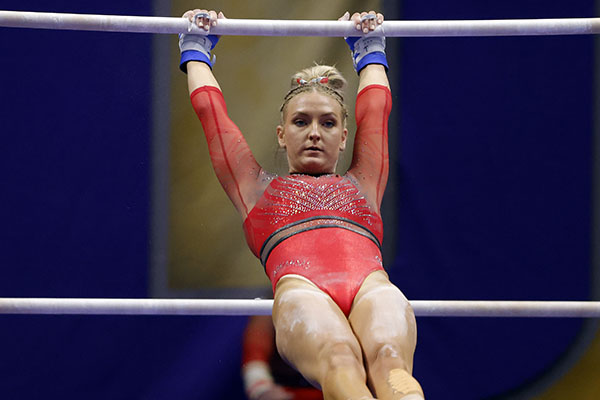 Razorback gymnasts score big, but fall to No. 1 Florida

Arkansas soared past a big milestone on Friday, eclipsing the 197 mark for the first time under second-year Coach Jordyn Wieber.

Fred, had the Gym’backs stuck a few landings in the vault, things could well have been different. It seems that they have the most work to do in that discipline. The final was still very close.

winning or losing a match is not hardly the point so much as your overall score when posted nationally. Whole point of women’s gymnastics is to have your scores climb through the season to the point you can get in those elusive championships with enough quality depth to potentially win. Once you are in the 197s, it’s best you keep going higher as opposed to falling back down–to prove your program is advancing.

I looked at the national gymnastics rankings this morning, which had not been updated from last night. The score against Florida was enough to pull their average up to #6 nationally, but of course other teams could also have pulled their average up.

This is the first 197 plus under Jordyn Wieber. The barrier has been broken. Let’s go!

#6 Utah lost a dual at Mobilehoma last night and scored 196.550, which was below their 196.725 average. #7 Denver has a meet tomorrow against Air Force (I’m trying to imagine little gymnasts in their AF dress uniforms). Our average is now 196.708, so we will pass Utah and would pass Denver unless they score 196.9 or higher tomorrow. #9 Iowa has a home meet tonight against Tattoo U but would need a huge score to pass Arkansas.