I’ve been knee deep in this lately 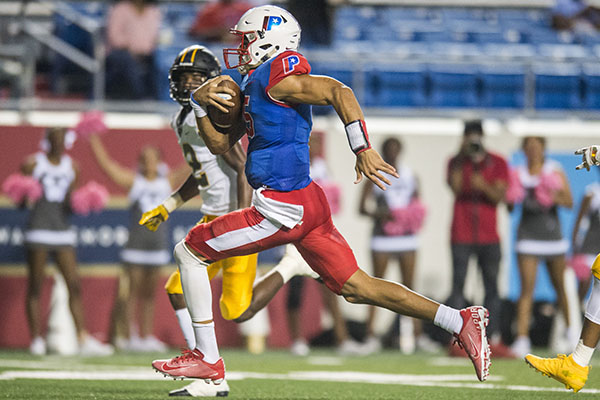 Pretty much from the time he stepped foot on campus, Sam Pittman made it clear his intention was to make in-state recruiting a main priority.

Thanks Dudley. Always enjoy this.

Great info here. Kudos to your talent evaluations. Looked to me like very few misses in your rankings.

When can we expect your evaluations and rankings of the instate 2021 basketball class? It’s pretty prevalent among top Arkansas basketball recruits to move to a power high school basketball program for their last year or 2. Do you still include them in your final rankings if they are from Arkansas?

We’ve never done a basketball one, but probably should.

if I do, I would probably include Arkansas-born kids at prep schools out of state if they had played at least a year of high school basketball in Arkansas.

You can sign four in-state kids a year and fill up a basketball roster and then some. Four kids a year in football leaves 69 more scholarships. Without going back and digging through previous years, it seems like Arkansas generally produces about 10-12 Power Five football prospects a year. I couldn’t give you the same number for hoops but it might be pretty close to that.

I get the sense that it is more than you have, say, 22 starters on football and only 5 in basketball. (Plus two+/- backups for each position.) Louisiana, typically, produces up to 100 D-1 football recruits every year. When you factor in they have twice our state’s population AND twice our percentage of African-American population, they should be producing four times our number of elite athletes each year, which would be about 50. For some reason, they are producing almost ten times our number of D-1 football recruits. I suspect our urban areas, Little Rock and Pine Bluff for instance, don’t turn out the elite athletes per capita that New Orleans, Baton Rouge, etc. do. Maybe we have a larger number of small school districts than they do and that reduces coaches, facilities, etc. which then finds and develops elite athletes at a lower rate. I don’t believe that there is the huge disparity in basketball or baseball when you compare the two states as there is in football. Maybe I’m wrong. I would just like Dudley and the knowledgeable folks on this board to help me figure this out a little better.

Baseball is a largely white sport in college. Thus the Louisiana demographics with more African Americans is of little consequence, although LSU does usually have some black players (including one they signed from Ashdown).

I would agree that we do a better job of producing D-I talent in basketball than in football. That seems to be due to the AAU system which is quite strong here. Our high school football system, schools and participants and probably quality of coaching, is not up to Texas or Louisiana.

The Little Rock situation has been particularly stark. Just not much football talent coming out of the capital city. Richard believes LRSD is investing more in football and this may pay dividends. I hope he’s right.

Me too. Parkview, Joe T., & North Little Rock are getting better, but there are several central Arkansas high schools who have produced no D-1 talent for years. They could do a lot better.