Here is an analysis of Feleipe Franks’ first start at Arkansas after rewatching Saturday’s game again this morning. I would have included KJ Jefferson’s two throws, but the broadcast cut away with around 1:30 left in the game.

Good stuff here, Scottie. Thanks for working it up. Gives an accurate depiction of what he did and didn’t do. I didn’t think he was awful, especially given the defense and the ability difference between the Arkansas offense and Georgia defense. Not many are going to look good against that defense. You better have superior players and size at offensive guard and center.

Really informative and appreciated. Based on CSP’s response to a query about Knox’s health, I hope Trey is going to take to coaching and learn how to get separation to be open. He has talent and needs to show it. Not dumping on the kid and I understand he was injured much of last year.

Great work, Scottie. Some of the positives I took away from Franks’ debut:

I do see some wins coming our way, and Franks will play a large part in them.

There is no way you should go a whole game and only throw the ball two times to Trey Knox. 12 passes at or behind the line of scrimmage… just a very passive game plan never tried to really push the ball down the field to create big plays, that will have to change starting this week.

One of Knox’s three targets was credited to him simply because he was the nearest receiver on a Feleipe Franks throwaway. So he technically had two conventional targets in the game.

never tried to really push the ball down the field to create big plays,

Six attempts of 16+ yards per Scottie. That would qualify as pushing the ball down the field.

But there’s pushing the ball down the field and there’s forcing things that aren’t there. It’s quite likely that FF checked down from deep routes that were covered rather than try to jam it in there Ryan Mallett style (and Mallett got more than a few of those jam shots intercepted).

It’s up to the receivers to create separation and it’s up to FF to get them the ball when they do. Maybe Knox was only targeted twice because he wasn’t getting open against a very good UGa secondary. If so that’s on him.

Knox was also the target of Jefferson’s incomplete pass.

Knox was also the target of Jefferson’s incomplete pass.

Which I didn’t see. I couldn’t get YouTube TV switched over to ESPNews; it kept trying to kick me back to SECN. That’s undoubtedly user error rather than a glitch, but at that point I wasn’t going to keep trying very hard anyway.

Speaking of which, it’s probably pretty telling that YTTV has Big Ten, ACC and SEC networks but not Pac-12.

Pac-12 TV distribution is terrible. It’s part of why the conference brings up the rear in TV revenue among the Power 5.

How is the Pac even going to play football? can you even go to a restaurant yet in california? get a hair cut? They have serious wildfire issues, groups of anarchists taking over blocks of cities, just a terrible year for ordinary people trying to live in CA or OR or WA. hard to imagine getting kids ready to play football. and those kids want to form a union, just so much unrest out there right now.

can you even go to a restaurant yet in california?

Yes, CA restaurants are open. (SMH) I’m spending the better part of next week over in Napa and have several reservations and wine-tastings booked.

As to the other events you mentioned, they are factually true, but more isolated than widespread. (Was in both WA & OR last month.)

From what I’ve seen, west coast states are just as pande-normal as anywhere else.

The PAC12 is another matter.

I’m glad to hear that they are opening, I had heard on Joe Rogan’s podcast last week or 2 that they were still closed. Those poor small business owners out there, yikes!

just found this on the California Restaurant Association’s webpage, today, 9/29/2020:

In most counties, restaurants are prohibited from operating indoor dining rooms, and other industry sectors are also strictly limited to outdoor operations.

However, in a growing number of counties, the state is permitting indoor dining in a very limited capacity. The state will be updating the list of counties every Tuesday to determine what, if any, movement a county may have between tiers.

There is no way you should go a whole game and only throw the ball two times to Trey Knox.

Said they had several passes called his way but Franks had to go to another option because he wasn’t open.

12 passes ( twice as many as the 6 you say he passed up the field).at or behind the line of scrimmage also qualifies as not trying to get the ball up the field where people can make plays. I can assure you Mississippi State didn’t throw the ball at or behind the line of scrimmage,they were running crossing routes along with up the sideline routes making the defense have to be perfect and obviously LSU was nowhere near perfect as they ate them alive.we will have to be much more aggressive getting the ball north and south and in areas where the players can make moves, you throw the ball out wide and you take away 3/4 of the field.

12 passes ( twice as many as the 6 you say he passed up the field).at or behind the line of scrimmage also qualifies as not trying to get the ball up the field where people can make plays.

Do you just not understand the concept of checking down? Look downfield, see that the receivers aren’t open (Sam specified that Knox was having problems with press coverage) and dump it off to the back or tight end rather than throw it away, take a sack or try to jam it into a spot where it won’t go. As I noted, one more check down to Tyson Morris would have been worth a touchdown.

I’m spending the better part of next week over in Napa and have several reservations and wine-tastings booked.

Good luck with that, it seems that Napa is on fire.

Miss State did throw short to Kylin Hill and will this week, too. A lot of flip passes at line is in the Leach offense. They run verticals against zone and crossing routes against man. The pick play is their staple. Gotta play both schemes and disguise.

FYI, Costello threw 10 passes behind the line of scrimmage. That’s quite a lot. And, the bulk of his passes were under 10 yards – around 30.

Here is Costello’s passing chart, courtesy SECStatCat. Drags, screens and go routes were targeted most frequently. Kylin Hill’s average depth of target was just over one yard vs. LSU. 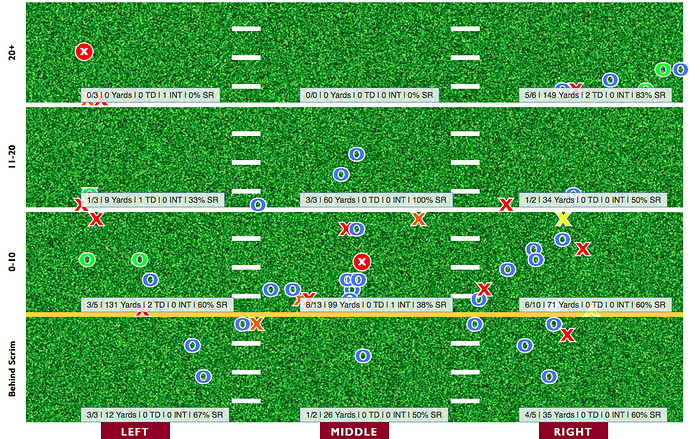 And a breakdown of his passing performance: