On the less-than-ideal finish to the win, and Moses Moody, Connor Vanover and Jalen Tate’s play: 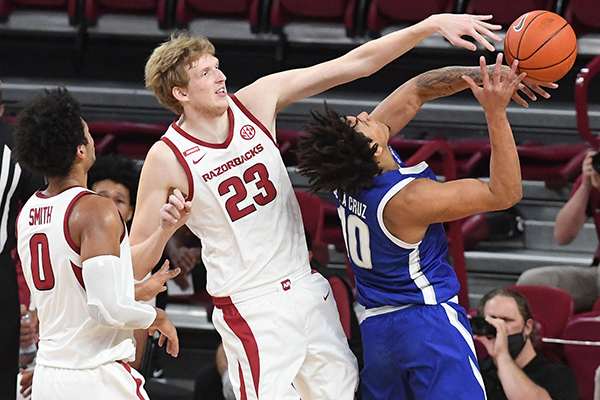 For roughly 32 minutes of Wednesday’s win over UT-Arlington, Eric Musselman was fairly pleased with the Razorbacks’ play on both ends.

"After freshman guard Moses Moody added a layup with 10:01 to play, Arkansas missed 15 of its next 16 shots. Jalen Tate added a jumper with 32 seconds left to cap the Razorbacks’ scoring and snap a streak of 10 consecutive misses.

Over the final nine-plus minutes, Arkansas missed six layups and Vance Jackson was credited with two of his three turnovers. UT-Arlington converted three fast-break chances in that span, too."

Sounds abysmal. I did not get to watch the last 5 minutes, but I could tell sloppy play had slipped in.

…But, most of what I saw earlier in the game was impressive. Moody looked excellent for only game #3.

Just not finishing at the rim. They weren’t bad shots, just like a lid was on the basket. I can remember one midrange shot from Smith that I was like “how did that not go in?” Did everything but fall through.

I thought at one point in that last five minutes or so Muss was going to pull the five guys then playing off the court and send them over to the practice facility to run line drills. It was about as frustrated as I’ve ever seen him since he got here.

I suspect that practice and meetings today will be unpleasant.

I’m not a big fan of running the clock down with 5 minutes left to play. It leads to bad shots and or turnovers unless you have a guy that can easily take his man off the bounce. Mason Jones was great at this but right now we don’t have that guy.

Chuck Barrett said on the morning podcast that Muss was practicing set plays the last part of the game, as if each one was the last play of the game. I don’t think he was slowing it down as part of a game strategy, but was working on how to win a close game at the end. I was really confused why we were slowing the game down as well but that actually makes some sense.

Thanks for posting that KJ…makes a little sense lol

Team is struggling with consistency but still very early. We have to get contributions from Jackson who is supposed to be a lethal 3 point shooter but can’t get one to. Drop,we have a lot if options offensively but must get tougher on defense and keep teams off the offensive glass… We can very good but got some polishing to do.

What do you make of JD getting benched in the second half? Seems like his shot selection has been iffy and while he does seem to be our best scorer, he doesn’t necessarily get the other guys involved as much as someone like KK could.

I was glad to see KK get 13 minutes. I imagine that Muss and KK have talked about his minutes and KK knows he has to improve his defense. It showed last night as you could see he was trying too hard, without great technique, as he fouled out in the game. He only shot once in those 13 minutes and it was a great looking made 3. No more attempts after that.

KK is too good a player to not get significant minutes. It may take a few games for him to settle in to what exactly Muss wants. He should never again take 1 shot in 13 minutes because he’s going to be one of the best offensive players on the team in time. We need those points when he comes in, but he’s also got to play good solid defensive minutes while he’s in there.

It was also good to see him get minutes along side Jalen. If KK is going to get 15-20 minutes a game, some of those minutes will have to be playing with Tate.

I think shot selection/decision making was part of the reason why he didn’t play much after halftime, but I need to re-watch the game to see if I missed something. Eric Musselman also said after the game that he thinks Notae’s thumb popped out at one point, and he just decided to run with KK after that.

“His thumb was fine, but his shot selection wasn’t. His thumb was fine. He might have grabbed it because he knew what was coming. I wasn’t real happy with the quick shots. He’s fine. We need him to score. We just need him to take shots that have a probability to go in the rim.”

KK needs to learn to play defense without fouling. Majority of his fouls are result of him bodying up and not moving his feet. Hopefully, when KK’s on the bench, he’s watching Jalen Tate very closely on how to defend without fouling.

Notae was pulled in the first half when he dribbled around the court for an entire possession. Musselman jerked off his mask when Notae came by him and if my lip reading is good, he said, “PASS THE BALL.” Obviously, there is a time in the shot clock where you have to attack the rim with the dribble, but that’s not what was happening on that possession.

Sometimes it helps to understand the emphasis the coach is placing on an action by going to your chair and watch.

when KK’s on the bench, he’s watching Jalen Tate very closely on how to defend without

Actually, Jalen has the most fouls on the team while, having just the 4th most minutes. Our best technique defender, by far is Smith. And Muss has even had Justin guarding big guards some. Tate is a very good guard and will be even better as he continues working on his feet technique.

I would be interested in seeing some analytics of how many stops Tate gets vs. Smith or any other defender. I would guess if you’re guarding the other team’s primary ballhandler in a man defense, you’re probably going to get whistled more often.

Sills leads the team in steals, with Smith second and Moody third. But that can come from traps and active hands more than sound positional defense.

Our best technique defender, by far is Smith.

Perhaps, but, I’m pretty sure Smith’s not assigned the best ball handler every game. I’m really impressed by Tate’s man to man defense…and he smiles the whole game (2 extra points for that:))

I would guess if you’re guarding the other team’s primary ballhandler in a man defense, you’re probably going to get whistled more often.

First, as I said, I think Tate is a very good defender. He is a great “effort” defender, which is what most fans see. He’s by far the best guard defender on the team.

Over the last 10 years, in D-1 basketball, there is only 1 guard who is listed in the top 20 players with the most fouls. The other 19 were predominately forwards with a few centers. I think that tells you that constantly guarding a good PG will not automatically mean you will be “whistled more often”.

I’m not trying to diminish the value of Tate’s defense. I’m simply saying that when we get into the SEC schedule and he goes against a lot of terrific guards, he may need to be more mindful of not fouling as much as he has in these first 3 games against lesser guard talent. We need him on the floor, not on the bench for 12 minutes with 2 fouls in the first half. I think Muss and our coaching staff will help him accomplish this.

This team appears to have enough guys who can score to allow Tate to be out there without worrying about whether he’s scoring much. We’ve got a lot of guys who can shoot the three and several who can score off the dribble. Really interested in seeing how our bigs play against quality size, but unfortunately that is not likely to happen until SEC play.

Tate has shown the ability to do a lot of things well that make teams good. It’s hard to understand the impact he has on the team’s level of play until you watch him.

I don’t see that he’s fouled out yet. 9 fouls in three games; all wins; not so bad.