The Razorbacks got off to a great start offensively and consistently applied pressure with one of their more efficient performances of the season: 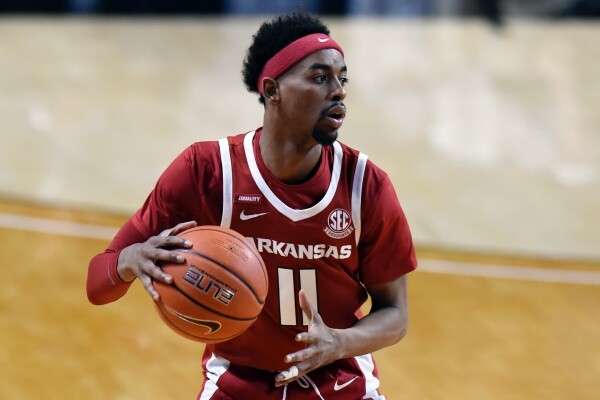 Arkansas’ victory at Vanderbilt on Saturday was likely therapeutic for the Razorbacks.

I am going to watch the game on DVR tonight. Looking at the box score, noticed Vandy’s second leading scorer Dylan Disu did not play. Was that COVID related?

Yes, the announcers said that repeatedly. Our offense looked good, defense was spotty, and our defensive rebounding at time was moribund. But we his shots, so dominated.

I just couldn’t root against pippen, he’s really good too. I would LOVE him if he wore a hog jersey

I would LOVE him if he wore a hog jersey

Pippen Jr. went to the same Southern California private high school that LeBron James’ son attends. According to 247, he got offers from three West Coast schools, Colorado State and Vandy, and he was a 3-star from both Rivals and 247. ESPN gave him 4 stars. Which is to say, he wasn’t on our radar.

Yes, I wrote in the second line of the story he was out due to contact tracing

Sports Center was running Jerry Stackhouse’s post-game comments, and he came down on(mainly) his veteran players like a ton of bricks, essentially saying that he’d never had a team that kept doing the same stupid things over and over despite coaching. It will be interesting to see how the team reacts to that rant going forward, and if Stackhouse moves all the younger guys up in their rotation.

If you listen to the whole Stackhouse presser, it was laced with profanity. He apologized for it later. He is very frustrated more with what COVID has done to his team than his players. They have been able to practice very little in the last two weeks and off and on this season. He has 8 new players and they need practices bad to develop team chemistry. And then he had to play without Disu. He is frustrated he was robbed of a nice 2019-20 when Aaron Nesmith was lost for the season.

It is a pity party but it boiled over yesterday.

This Arkansas team looks like Hulk against the lesser teams. But, they lack discipline, strength, and talent against even slightly better teams, such as Missou, and do not fare well.