For 7 seasons as a college head coach, Eric Musselman has kept the message on the pregame dry-erase board consistent.

Take care of the ball.

“Right now, we’re way, way too careless with the basketball,” he said after Saturday’s loss at Texas A&M. More: 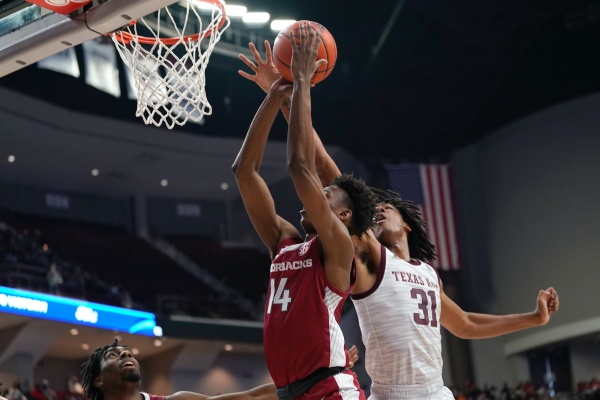 For 7 seasons as a college head coach, Eric Musselman has kept the message that appears on the dry-erase board in his team’s pre-game locker room consistent.

I thought the first 8 minutes of the game we looked as sharp as we have looked all season, After that we seemed to have lost focus and began being careless with the ball, took questionable shots and slacked off on defense. Hope we pull together as a team soon. WPS

Honestly, I think we are a better team when Devo is not on the court. Loved the starting lineup (Notae, Jax, Toney, Umude, JWill) - though I would switch JWill with Kamani for more toughness and energy. Hope we see more of it.

We are what we are I’m afraid.

Watched the game in person.

Team roster was not constructed well in my opinion but that’s been subject of debate since close exhibition games.

With talent deficiencies it doesn’t seem like we are coaching to the talent, instead rather playing positionless basketball preferences regardless.

Don’t like Muss’s version of a press which does not trap or double team - I assume he doesn’t like to do in any case.

Arkansas should always be an NCAA tourney team and this is not one I’m afraid.

Just a reckless and careless brand of basketball from this team now. Trying to do something to fast resulting in a turnover or just the opposite, dribbling until a turnover or bad shot. That’s just on offense.
Defense whoa, take your pick.
Not what Muss or Us envisioned this year.

The first 8 minutes, and the last 6 1/2 minutes or so, were encouraging. Scored 81 pts. More than enough to win, even with the turnovers and missed free throws.

The only way this team can right the ship is to get better on the defensive end of the court. We gamble way too much for steals and play too much help D, imo. We’re always scrambling around like a chicken w/its head cut off becuz players can’t stay in front of their man. Eventually our D breaks down, and gives up open looks. I wish Muss would considering a sagging man D similar to what Bennett plays at Virginia. Cutting off some of that dribble penetration into the lane would help a lot, imo. And I’d like to see the team SLOW DOWN on offense. We lack quality ballhandlers to play with pace. We’re in too big of a rush to make something happen quick. Causes many of our turnovers. Just my thoughts.

One very key missing element from this team and will be next year too unless we address it… we have no interior presence on offense or defense…
we have no big athletic guys that everybody else seems to have… we need a big man or 2,3 that we can throw the ball into and they will look to score and can score! We need the same big men to be able to protect the rim,which will allow us to be more aggressive on the perimeter. Right now we dribble around the perimeter and end up having to shoot a bad shot because we cannot throw the ball inside, right now we allow dribble penetration and we have no one there to stop the inevitable rim area shot…I do not know why we are having a hard time getting those type of people here. Next year’s class will be off the charts athletically but we will still be missing the aircraft carrier as Al Maguire used to call them… hopefully we will get this added to the team before next year.

I know we have a nice class coming in which is credit to coach and staff.

I don’t understand how it missed so bad on this year’s roster with such lack of basketball IQ and ball handlers.

As one at the game we definitely played hard. But watching same mistakes on O and D over and over. Almost like we don’t practice - or maybe just don’t have personnel to run it. A and M was good but not great. And Arkansas should never miss an NCAA tourney and looks like we are taking this year off.

I don’t think there are any open scholarships available for next season to add any bigs. One or more current players will have to transfer out, to bring in a couple of post players we need desperately, imo.
At one time, we had 3 decently athletic bigs on the roster with Iyiola, Henderson, and Mawein. Now they’re all gone.

You can also put Lykes in that box as well with Devo.

The same turnovers over and over again. Game after game. Trying to force a pass into a packed lane. Ball is deflected and stolen. Trying to make a ridiculous cross court pass that’s get intercepted. Every game. Players just can’t seem to learn from their mistakes.

Yeah we really need an inside presence on both ends of the floor for us to really be a complete team… getting a true point guard will help as well. I think we will easily take care of that next year but still don’t know where the inside presence is going to come from

We need both, but with the quality of players coming in next year the point will likely be handled better. We still need a player to fill the hole left by the loss of Smith.

There isn’t a manic wand to fix the issues it’s up to the players.

J Will has such a great high post game with his passing. He needs someone with size to get the ball down low to; a complementary piece to his high post game, if you will. Jaylin’s skill set is being wasted by not pairing him with a quality low post scoring big.

Don’t like Muss’s version of a press which does not trap or double team - I assume he doesn’t like to do in any case.

Yeah, he doesn’t really use a full court press unless the score and clock require it. With this team, it’s also just an out of control “fire drill”.

Last season, though he did frequently utilize double teaming in the half court, but if you noticed, it always included Smith and the trapping was primarily on the wings. Smith and Moody or Smith and Tate (when Tate was on the wing) was usually successful. Double teaming requires high IQ defensive players who recognize when and how to play it.

Smith was so important to last season’s successful run. Take him away and we would have been a bubble team. You have to look no further than our miserable SEC start (1-4) when Smith was out. We turned that into an 11 game SEC winning streak when he returned after surgery. This was especially apparent on the defensive end. When Moody went into his shooting slump in the post season, it was Smith that picked up the slack on offense. He had a extremely high basketball IQ on both ends of the floor.

Yes this team also misses Tate because we have not developed even a solid facilitator. But Muss also missed totally on Smith’s replacement as the team’s all around leadership on both offense and defense. I thought, early on that Toney might be that guy, but that just hasn’t happened.