On the familiar issues – finishing at the rim, turnovers, defensive rebounding – and more: 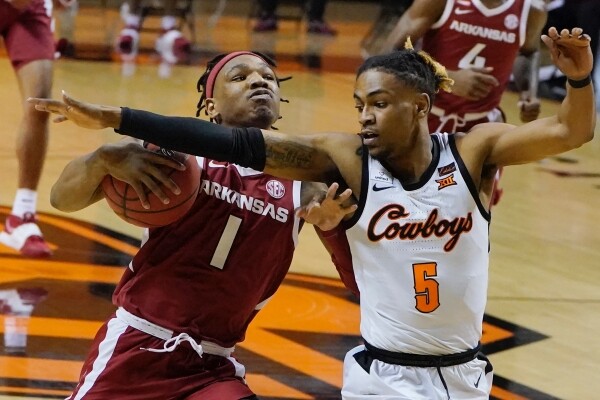 Justin Smith is of the belief that Oklahoma State’s front line spooked the Razorbacks in the opening minutes of Saturday’s 81-77 loss.

That was precisely what we needed in the last 5 minutes of the game. You add that he has a lot of close game experience and it just didn’t make sense to me.

I thought maybe Desi was sick.

One of the many questions I’d like answered is why did he choose to jump (and take the ball out of the hands) of the kid who couldn’t shoot (even tho he banked in a 3) but play Cunningham straight up?

Musselman said Desi is physically fine. Didn’t offer up anything else.

rehearse whatever stats you want, this team is just soft. Nolan’s teams would have eaten this team alive.

Very strange that Smith would say that they didn’t know they were a good shot blocking team when Muss mention how well their guards blocked shots. I assume he told the team that

rehearse whatever stats you want, this team is just soft.

Yes, no floor leader and seemingly no athleticism.

Just an observation, but wonder why the Hogs seem to have such difficulty in inbounding the ball versus pressure. Yesterday, I don’t think they turned it over inbounding, but often found themselves in bad positions with ball upon inbounding the ball. In watching, it seems the the inbounding player is slow in making the decisions, regardless this has been noticeable in numerous games.

Take a look at the picture of JD Notae driving to the basket and Rondel Walker arm barring his neck. That’s part of the reason that we missed layups at the basket. Nothing was ever called on body shots so OK St. just played more and more physical because nothing was called. It’s tough finishing when you’re getting hammered all the time.

What the Razorbacks need is some toughness drills. When I coached Int’l basketball I used to put 3 men under the basket on a rebounding drill and there were no fouls. The first to 3 baskets won and got out of the drill. When they got a rebound or a tip the other two could foul, push, grab or do anything to keep the guy with the ball from scoring. You learn in a hurry how to play physical. Another drill is to roll the ball between two players and they have to get the ball and score. You find out in a hurry who has guts and will play with reckless abandon when it comes to loose balls.

Having seen some Muss practices, Arkansas has plenty of toughness drills.

In fact, variations of both of the drills you mentioned are in the mix.

They are very similar to the drills that both Coach Sutton and Coach Richardson.

But you can’t turn a sheep into a lion just because you want it to happen.

I’m the toughest 5-9 57-year-old mentally and physically you will ever find, but I still can’t dunk.

I have been saying all season that somebody needs to have their head separated from the body on one of those easy drives down the lane.

I would have been kicked out of the Missouri, Alabama and LSU games. Basketball is about more than finesse.

Love the comments on this post, for the unfortunate reason that these are the facts about this team. So much of basketball is about basketball IQ, toughness and want to. We lack that in many spots.

basketball IQ, toughness and want to.

We’ve become pansies. The team needs to grow some, fast.

You would’ve been an outstanding hockey enforcer too!

Spot on. I’d love to see Moody take that spot. He reminds me of Joe Johnson when he was here. Opportunistic scorers that rarely take over a game. At the end of the game you see the stat line and wonder when they scored all those points. The stat lines for Cunningham and Moody were very similar, but if you were to ask most observers - Cunningham dominated that game, especially at the end. That was leadership on the court.

Moody misplayed the play before halftime.

When your opponent goes to the free throw line 15 times and you get 7 that don’t sound that bad until you watch the recording again. Then you will see the whistles called when Cunningham took over the last 4 minutes! That’s just crazy. If it’s a foul with him driving it should have been a foul all game long.

Bottom line the hogs had a 5 point lead despite the refs and couldn’t even get a shot off without committing a TO! Sometimes the basketball IQ needs to take over and get the ball moving and stop getting the ball to your teammate in positions they can’t score. We had poor player movement and ball movement. Cross court passes that get picked off, passes from a 7’3” big from the top of the key to wing lazy that’s goes for a layup or dribbling into the lane in a crowd to walk! Just a few examples of ways to get your rear end beat!

It’s not Moody’s game; at least yet. The Hogs would have won last night’s game with Mason Jones.

Spot on. I’d love to see Moody take that spot. He reminds me of Joe Johnson when he was here.

Joe Johnson used to take over the game late when he was here. He had the ball in hands. He hand the handle, the crossover and he could take the defender off the dribble many ways. At this time of his career, Moody just doesn’t have that handle.

Unfortunately for Moses, until he got here he has never been the best player on his team. So, he was never required to takeover a game that I can recall. I think he needs another year before he can do that.

If he stays another year, he has the ability to be an All-American by putting in a lot of off-season work to improve the handle to dominate a game like Cade Cunningham can,

PJ, you’re exactly right. I personally think he needs another year but I doubt Moody stays. He has some things he could work on but it’s hard to turn down the money.

I would like to see one or more of our players take over the beginning of a game.

Is it just me, or doesn’t it seem that for a little while now we start every game with lots of passing and obsession with passing it in the paint only to turn it over or miss shots close? I would be happy if we would just take the 10 foot jumper we are getting and making at a decent clip.

I’m getting a little sick of listening to Muss say it’s been a problem all year finishing around the rim. Well how about we take fewer attempts at shots we aren’t good at and passes in the lane where we turn it over. If you’ve been saying it all year…it’s on you Mr. coach for pushing offense we aren’t in tune with. I’m also not sure what the deal is, but if the refs aren’t going to give us fouls on rim attempts then maybe that is another reason.

Last year he was pretty overt with we are going to be high 3 shot attempt team due to lack of size, i.e. paint production. Well…maybe we have more size…and maybe more paint capability…but so far it just results in muss bitching about how we can’t make contested layups. Either fix that in practice or take less of your offense into the paint…or at least quit complaining about it. Not every team is good at everything.

Maybe he’s just convinced we have to make effective paint play part of the arsenal this year or we just won’t be a tournament team. He’s certainly the head coach for a reason.