Richard alluded to the fact that he was aware that a “commitment video was out there” some time ago.

Turns out that Ketron asked the guys from Texas’ 247 crew to film it for them, so they thought it was going to be Texas - but it wasn’t…it was Arkansas. This was maybe 2 months ago. However, to their credit, they didn’t release the story.

A couple of weeks ago, he reached out to them and asked if he could re-shoot it (or, at least, parts of it), so they agreed and that’s when there were more rumors about him maybe swinging over to Texas. Now - I don’t know; maybe he did have some second thoughts. But, as you can see, version #2 also ended with a Razorback.

I just think it’s cool, after all the times we’ve been led down the road…seen Dudley or someone drive a long way for a kid’s commitment only to see them waffle on a private commitment to Arkansas and pledge to someone else, that it went our way this time.

And - yes - I’m FULLY aware that it won’t mean a thing if he ends up signing somewhere else in December. There’s always that chance. But for someone who probably knew where he wanted to go 5-6 months ago to wait this long to announce, I’m feeling pretty good about our chances of holding on to him right now. 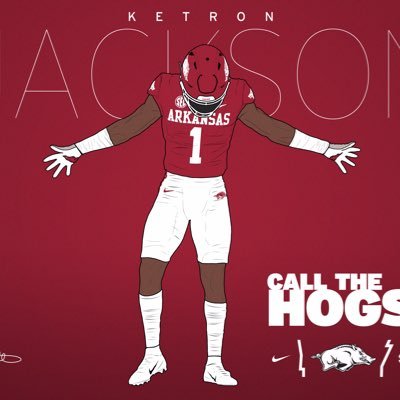 Not sure I understand one thing about this. Isn’t 247 Sports their own thing? As in it is not part of University of Texas athletics or Arkansas athletics or whatever. So are you saying the video was done by 247 people who happened to be in the state of Texas? If so, no one was being mislead, any conclusion was pure speculation on their part.

Not sure I understand one thing about this. Isn’t 247 Sports their own thing? As in it is not part of University of Texas athletics or Arkansas athletics or whatever.

247 has various sites associated with various schools. HawgSports (dot) com is the Arkansas 247 web site. Just as Hawgs Illustrated was at one time a Scout (dot) com site. So the people that he asked to help were those affiliated with the 247 site for texass

Thanks for the explanation. If the shoe were on the other foot, maybe people would not find this as amusing, but even in that case it would be nothing wrong, not intentionally misleading anyone, certainly not the University.

He sure seems to be all MAN! Don’t care who did the video or who thought what. Just glad to see that Hog at the end. Hope it holds to Dec. I am sure they will continue to recruit him hard until then.

I agree 100%. Just wanted to know exactly what was being said.

A good ending for the Hogs, I hope (and believe) there are many more recruiting victories to come as a result of CSP