Wrote on Arkansas running back AJ Green, who is in a better position to contribute in 2022 after a healthy run through spring drills and fall camp: 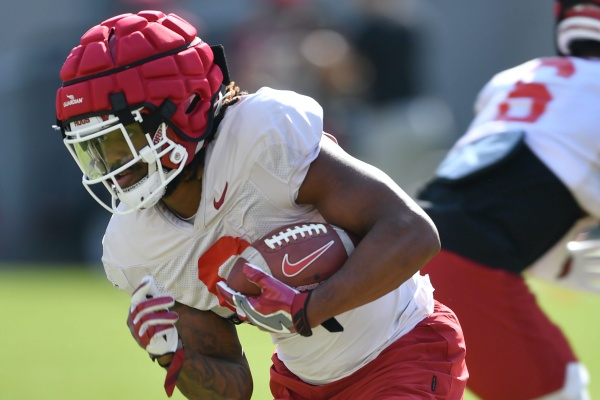 Green on go after full spring and preseason

Those who closely follow Arkansas football saw AJ Green flash game-breaking potential a couple of times as a freshman.

Sam doesn’t seem to be real impressed says He’s just been fine. He’s good and then says the Dubinion the true freshman is pressing him tells me he’s not been setting the world on fire. I think Sam sees him more as a special teams player, thinks he will be great there.
I’m a big fan of his but looks like I may be the only one. Rocket will get most of the carries then DJ will get to carries, don’t see AJ getting a whole lot of carries, that’s a shame, he has more breakaway speed than any of the backs.

I’m old school; I liked freshmen not playing with the big boys. The difference between HS and College play is huge…and sometimes against guys who’ve been out of HS for 5 years stretches the contrast. He got hurt early …that impeded his progress last year.

I’d like to think he has more than straight line speed. I’m thinking the Dubinion comment has more to do about a dig at UGA (er, their bust)…

AJ is literally the No. 2 tailback. If he doesn’t get carries Saturday I will be pretty dang surprised.

Yes he will get some against Cincinnati hopefully he will take advantage of them. But once DJ comes back he probably won’t be getting many unless he explodes for big numbers Saturday

I am humored by worries about how carries will be split when no one has seen practice. Dubinion looked the real deal to me in the two full workouts I saw.