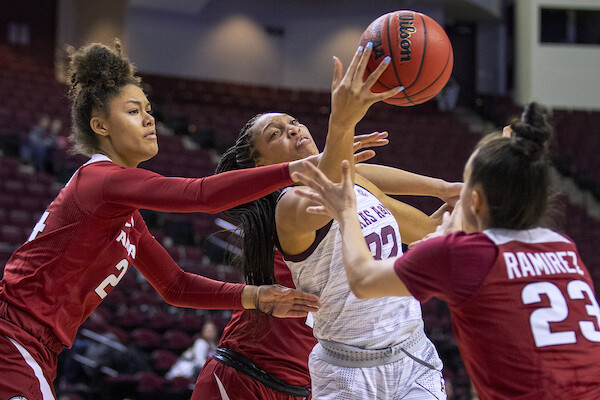 The last two times Arkansas squared off with Texas A&M, the game was decided by one or two points.

We looked lost without MD. Truly. Hopefully she’s back sooner than later.

No way to sugarcoat it, that was a bad loss, with or without Daniels. The last 2 games are head scratchers for me. Shoulda beat an overrated Tenn team, and didn’t even show up to play against a bad A&M team. This team has way too much talent to be in the position they suddenly find themselves in. It all comes down to FT’s and rebounding, again and again.

The Tennessee game was a 2 loss game! With or without Daniels the hogs should have beat the Aggies! The hogs didn’t attempt to rebound until the 4th quarter! That’s too late. They have been miserable at best from the free throw line too! The 3 ball was there at Tennessee but was absent at Aggie land.
Daniels needs to return soon and run the show.

Well…not to disagree…but we beat Tennessee if MD doesn’t get hurt. Period.

FT’s are a mystery.

Rebounding is better this year than last…but we do need to keep improving in that area. Sasha keeps getting into foul trouble. That hurts. Jersey is rebounding better than a month ago…but she needs to keep getting stronger (and healthier…her back does seem to bother her much less now). Barnum hasn’t been 100% since she returned.

I do think this team makes the NCAAs…and we all knew that the next two years will see this line-up show what it can do. We will miss Amber…but Makayla has two more years (if she takes the covid year), and all the other major players, including Dauda, will be here awhile.

Still optimistic about the future. This team is YOUNG.

I don’t disagree with any of that, Robbie, but as fast as Coach Neighbors wants to play, you still have to rebound. It’s very telling when Rylee is rebounding and defending better than Barnum. FWIW, I am optimistic too. I just want to see them reach their potential. There is no reasonable excuse for the way we played last night against that team.

Agree. Barnum has to rebound better. But–is her knee healthy or just good enough to play?

I don’t know, but she looks out of shape to me. She went coast to coast last night, but should have been called for a travel. I’ll admit, I’m not a huge Barnum fan. I think she’s lazy and her own biggest fan. Maybe it’s just me. I really like Sasha. She’s a killer. And I wish all of them played as hard as Rylee does.

Agree about Rylee. I adore her. And Sasha is on her way to being a truly great player. She usually draws the opposition’s best offensive player (unless they are the 1)…and she is indeed a killer. At the moment though she has lost confidence in her shot. At Oregon State last year she shot the 3-ball pretty well… .36% for the season. She also was solid at the line: 72%. This year she’s .246 and .649 respectively.
Sasha has got to figure out how to stay on the floor too.