Aggie joke week….I’ll get us started

What is the best selling under arm deodorant in College Station?

I fully understand the tradition of Aggie Jokes.

But truth be told, I’m just not feeling it.

They’ve beaten us every year since they joined the SEC.

We are the Aggie Joke.

Dang I wanna beat those guys this weekend.

An Aggie, a Longhorn, and a Okie walk into a bar.

The bartender asks, “is this some kind of joke?”

“They went at nite”

That was the punch line. Remember the joke? 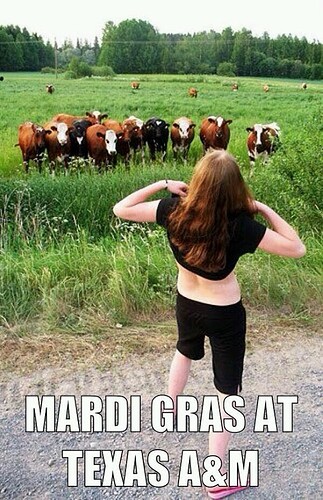 Or, they were Number 2 in the nation when they came to LR. What was the joke? The Aggies!

That picture would be even funnier if it was a cow showing her udders to a group of salivating corps members.

There is no such thing as an Aggie joke, all of the stories are true!

Why does an Aggie leave their diploma on their windshield dash?

Two Aggies were walking across the campus when they see a dog lying in the grass licking his privates. Aggie #1 says,“I’d give anything if I could do that”! Aggie # 2 says, " If you did that dog would bite you"!