Advanced stats preview: No. 6 Alabama at No. 20 Arkansas

Here is an in-depth look at both teams entering Wednesday’s game, and several player trends: 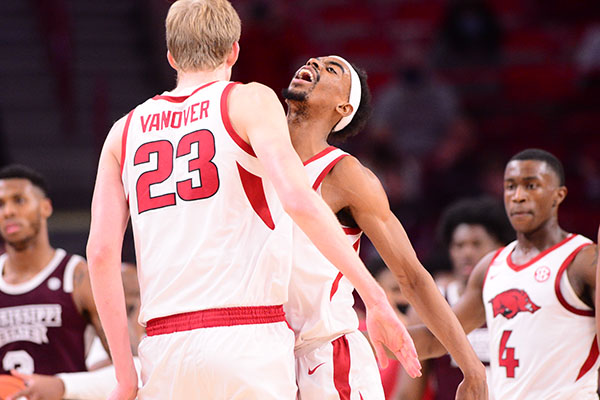 A deep dive into the Razorbacks and Crimson Tide, and key player trends ahead of Wednesday's top 25 matchup in Fayetteville.

That’s a little sobering Scottie. Alabama’s #'s are so impressive. #2 in the nation in defense and an offense that hits 3’s like they do. One conference loss - and it was by 3 points at Missouri, with Tillman playing.

You weren’t excited by Musselman’s career record at home after 4+ days off?

Bama shot 42 percent Saturday at home against Vandy including 25% from deep, so they’re capable of an off night. Maybe two off nights in a row?

Looked this up this morning:

Nine or fewer 3s tonight might be the magic number for Arkansas.

I was! Ha guess I’m trying to manage expectations for this board! We are slight underdogs and I’d hate for us to lose and everyone go nuts again.

Nine or fewer 3s tonight might be the magic number for Arkansas.

It will, of course, depend on how many they attempt though… 9 out of 18 might not be good for us, but 9 out of 38 almost certainly would be.

You can expect about 73 possessions per team tonight (Bama averages 74, we average 72). If we run them off the 3-point line enough that they only try 18 treys, I like our chances. We just have to rebound the misses, and hopefully part of the limited number of threes is because we turn them over a lot. They average 14 turnovers a game; we average forcing almost 13. Get them to 17+ turnovers and limit them to 18 attempts from deep, I like our chances a lot.

I understand, for sure. According to Vegas Insider, though, Arkansas is favored by 2 right now. Obviously could move prior to tip.

Something else I found in Alabama’s home/road splits in the league is it shoots nearly 57% inside the arc at home and 43% on the road. Arkansas would like that trend to continue. Contesting interior shots will be critical, too.

i think the stats are really messed up for Arkansas. Statistically, we were torn up when Smith went down, missed a few games, probably came back too soon, untll a recent near full recovery. But, while he was down, the Hogs started improving in other areas. Simply, this is not the same team from early January. Fingers crossed, I’m expecting a good, solid performance from the Hogs tonight.

Bama’s D is undervalued. Bama players have quick hands, especially on the perimeter.

No lazy passes from Hog players, or Bama we’ll be on the other end in a flash scoring easy transition layups and dunks.

Arkansas has more size inside than Bama. Need to take advantage of that tonite.

We are slight underdogs

This board will melt down if we lose regardless, because that’s what it does. Hell, it’ll melt down in the first 10 minutes if we’re not up by 15, because the trolls come out from under the bridge.

Shoulda given the points…

Who would have thunk it. I was nervous. Especially at halftime.

They tried their 33 treys. And needed to hit 5 more of them, and if we’d made a decent number of foul shots, they would have needed 8-9 more of them.