Anyone have news on the status of the Aggie starting QB after the injury yesterday? 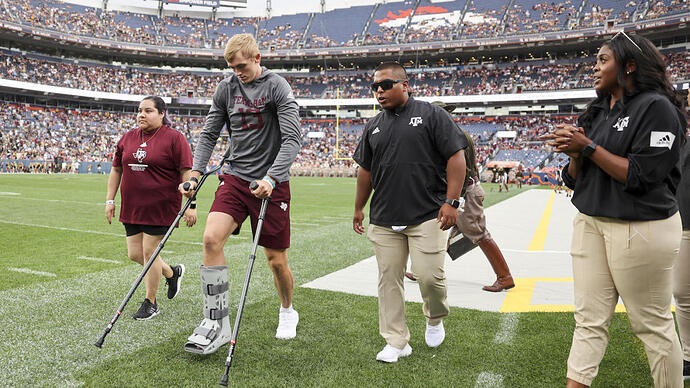 Texas A&M QB Haynes King out until at least mid-October with a fractured...

They’ll have two weeks to get Calzado (sp?) ready. I doubt they’ll be too down at that position. I watched him play most of that game against Colorado. He appeared to get better as the game progressed. He was hitting some nice passes at the end. He made the mistake of reaching for the EZ and had the ball knocked out just before he crossed the goal line that cost them what looked like the game winning TD. He kept his chin up & then led them to the game winner on the next series.

I’m sure the kid was #2 for a reason, so I won’t discount the possibility that we’re playing a slightly weaker team than we might have been, but he was recruited because he’s got talent.

It was a road win. Maybe not so bad.

The A&M back-up QB would be a good candidate to start at most teams not currently in the top 25. We will have our hands full to come out the winner in this match up.

Semi-road. Game was played at Denver and there were a bunch of Aggie fans there.

One thing that has to worry A & M is that they only got three yards a carry against Colorado, which is part of the reason they ended up throwing it 40 times in that game, despite the game being so close the whole way. They were going to want to run the ball a lot more this year anyway, now it’s an absolute must.

I’m sure A & M will put up gaudy numbers against New Mexico, but this injury really puts a lot of pressure on their defense and running game.

Semi-road. Game was played at Denver and there were a bunch of Aggie fans there.

From the way I understand it, the game was reclassified as a neutral-site game, which gave Texas A&M the ability to sell more tickets. They were supposed to play a home-and-home in College Station and Boulder, but the 2020 game in Texas was canceled. They settled on one neutral-site game in Denver.

Makes sense. And would explain why there were a lot of Aggies. Attendance was 61K IIRC.

Game was played at Denver