from the FCA banquet in NLR with Pittman.

Nothing new on the contract.

The coaches were in the office Monday & Tuesday talking to the current players to make sure they’re good. They’ll do the same on Wednesday before hitting the road recruiting in Arkansas for two days.

Pittman has met with about 48 players for exit meetings. Many more to come.

It’s been reported but the focus is still two DL and a WR from the portal. If a can’t miss skill player is available, they would take him.

Do you think there would be interest in Gerry Bohanon if/when he hits the portal? Better depth at QB and compete with Hornsby next spring for 2023 starting role?

Bohannon would have to beat out KJ would he not? one year left and he has resdshirted,

Why did the Bears opt for Shapen?

Sam Khan Jr., college football senior writer: At the start of spring, Aranda made it clear that Shapen had to outplay Bohanon to win the job since Bohanon led the Bears to 10 wins as a starter last season. Shapen’s pure passing ability, confidence and overall play in spring won over the staff.

The flashes he showed in his two starts last year also weighed in because Shapen made some impressive throws in that stretch and gave coaches the sense that Baylor’s offensive potential could be even greater with Shapen behind center.

What does this mean for Bohanon?

Khan: Bohanon is a fifth-year senior with only one year of eligibility remaining so he has to decide whether to stay on as the backup or seek a starting job elsewhere.

If he decides to transfer, he must enter his name in the transfer portal by May 1, the national deadline for fall sports athletes to declare their intent to be eligible to play in 2022. Look for a decision from Bohanon in the coming days. 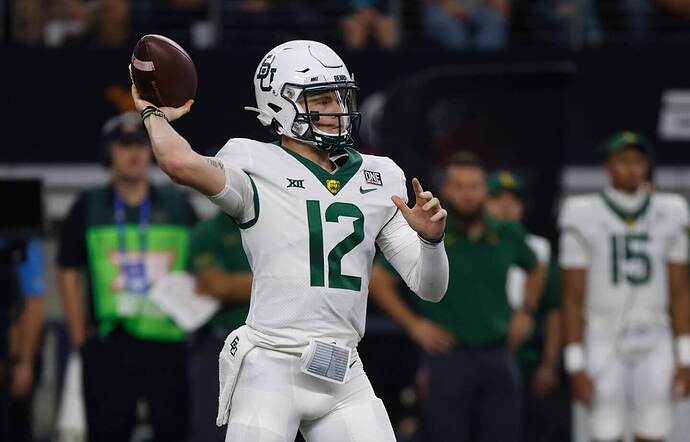 Shapen, who backed up starter Gerry Bohanon in 2021, won a competition during spring football with Bohanon and redshirt freshman Kyron Drones.

Do you think there would be interest in Gerry Bohanon if/when he hits the portal? Better depth at QB and compete with Hornsby next spring for 2023 starting role?

I would doubt it.

I think it’s pretty telling of where we are now in football now that Sam would probably pass on Bohanon. A few years ago that would’ve blown my mind.

I think it’s pretty telling of where we are now in football now that Sam would probably pass on Bohanon. A few years ago that would’ve blown my mind.

That’s just my opinion. Could be wrong. Figure he’s going somewhere that he’s the man. KJ is the man at Arkansas.

Yeah and KJ clone Singleton will be joining us next year. Hornsby may be ready to show out big time by next year as well.

I do not think a QB new to this system would be a “KJ clone”. It’s taken a long time for KJ to ripen. While I expect KJ to be our starter, I just can’t see Hornsby overtaken by anyone beside Renfro.

KJ Clone means he plays very similar to KJ. Same size, very similar throwing motion, even better runner but like all QB’s it will take time once he gets in college but they are very similar .

Definitely faster. He looks like he could be an SEC RB. Thrilled he is a Razorback.